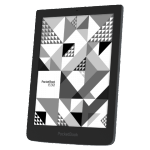 With the launch of the camera-equipped Ultra and the announcement of the 8″ Ink Pad, Pocketbook has proven to be one of the more innovative ereader maker of 2014, and they are topping off their success with the launch of a new model which was designed by the French Fashion house Kenzo.

The Pocketbook 630 Fashion has specs similar to leading models released last year, so there is really little reason to upgrade, but it does feature a well designed case and the relocated page turn buttons found on the Pocketbook Ultra.

The 630 Fashion has a 6″ Pearl E-ink screen with a frontlight and touchscreen. It has 4GB internal storage, a microSD card slot, and Wifi. While it doesn’t have the 5MP camera found on the Pocketbook Ultra, the Fashion did inherit that ereader’s peculiarly located page turn buttons. Unlike most ebook readers, the page turn buttons are located on the back.

This ebook reader runs Pocketbook’s proprietary software on a 1GHz CPU with 256MB RAM. Like other Pocketbook ereaders, the Fashion supports a broad range of ebook formats, and it also ships with a number of dictionaries, including both English and Russian as well as translation dictionaries from ABBYY Lingvo.

Weighing in at 175 grams, the Fashion has a 1.5Ah battery which is expected to offer enough run time for 8,000 page turns. It also has an ambient light sensor which will automatically adjust the frontlight, reducing or increasing the brightness according to the surrounding conditions.

The Pocketbook 630 Fashion is expected to ship in Russia some time this autumn, with a retail price of 7990 rubles (about $213 USD). That’s quite expensive compared to the US market, but that price point has become the de facto standard for the Russian ereader market.

Update: A new report has revealed that the Pocketbook 630 is also going to be sold in Germany under the product name Pocketbook Sense. It is scheduled for release this month.