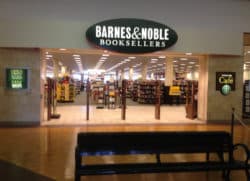 After this week’s news that Barnes & Noble has lost money yet again, I decided that perhaps I should begin thinking about writing B&N’s obituary. After all, I am a B&N member and I buy a lot of books from B&N and I will miss it when the last store and website is finally shuttered.

But I was told not to don my mourning clothes yet. B&N has a plan. Great, I thought, until I realized that the same people who have brought B&N to its knees are the ones with the plan to save it. Not very likely.

The problem with B&N is simple: management that cannot see even a baby step’s worth of distance in the future. There are any number of relatively simple steps that could bring B&N back from the precipice, but each would have to begin with a recognition that today’s management team needs to be gone yesterday.

Start with customer service. How poor can customer service be? I don’t know but B&N is surely leading the way. Consider what happens when you call customer service. If you are lucky, you get someone who speaks English like a native and without a thick brogue that makes them incomprehensible. You know you are in trouble when the representative calls you “Mr. Richard.” The reason this is a problem is that the reps do not understand the problem you are trying to convey and so insist on a solution that is no solution.

For example, I recently ordered a book from Amazon Canada. I had to order it there because neither B&N nor Amazon US was showing the book except in their marketplace and the marketplace pricing for a clean copy was double or more the price Amazon Canada was asking. (The book cost over $100 to begin with, even at Amazon Canada.) When I received the book from Amazon, it was the right book but not the advertised book. The advertised book was for the correct print year and did not state that it was a print-on-demand reprint; in other words, I thought I was buying an original copy.

I realized that because of the book’s age, all that would be available would be like this, so I wrote Amazon Canada and told them I intended to keep the book but that they should note on their website that the edition they were selling was a POD reprint. Within a few hours I received a reply thanking me, telling me that the information had been passed on to the appropriate people, and because I planned to keep the book, Amazon was refunding 25% of the price.

The book from Amazon was the first volume in a nonfiction trilogy. Volumes 2 and 3 were available from B&N, and so I ordered them from B&N. Volume 3 was just released, so it was not a problem. Volume 2 was released several years ago but not so long ago that I should expect a POD reprint — but that is what I got. So I called B&N customer service (sending an email is, I have found, an utter waste of time). I got one of the “Mr. Richard” representatives. I tried to explain the problem and explicitly said I planned to keep the book and that my only purpose in calling was so that they could adjust their website to indicate that it is a POD reprint. After all, this was another very expensive book and the website implies you are getting an original.

I might as well have been talking in a hurricane for all that the representative either understood or cared. The rep “resolved” the problem by ordering another copy be sent to me because he agreed that website did indicate it was not a POD reprint that was being offered. I tried to prevent this, but after a few minutes, I gave up. I received the second copy of the POD reprint and sent it back with a detailed note indicating what was wrong and what I thought they should do. And so the tale ends.

There was no follow-up from B&N and the rep didn’t understand the problem or the solution I was suggesting. (He did say that there was nothing he could do about the website. Apparently that includes notifying anyone of an error at the site.) Bottom line is that B&N customer service continues to be an example of what not to do and Amazon continues to be an example of what to do. This same complaint about customer service was made several years ago on AAE and elsewhere and the same management team continues to do nothing.

The second place for B&N to go is to improve the interaction between buyers and B&N. B&N needs to be innovative, especially when it comes to its members. How difficult, for example, would it be to let members create a list of authors in which they are interested and for B&N to send a monthly email saying that a new book by one of my listed authors has been announced; click this link to preorder.

Along with that, B&N should guarantee that the preorder price is the highest price I would have to pay (which it B&N already does do without saying so) but that should at anytime before shipment the price be less, B&N guarantees that the lower price will be the price I will pay. As it is now, because I preorder books months in advance, I need to constantly recheck and if a price is lower, I need to cancel my existing preorder and re-preorder. Can B&N make it any more inconvenient for the customer?

In addition, B&N should be sending me monthly emails telling me of upcoming or newly released (since the last email) books that are similar to books I have previously bought. I know they have the information because both online customer service and the local store management are able to peruse books I have bought. To entice me to buy from this list (or even to preorder), B&N should offer me an additional 10% discount on the listed titles, which discount is good until the release of the next email and the next list of books.

Members of B&N are the prize for B&N. Members are likely to be those who buy exclusively or primarily from B&N and not Amazon and are the people who are more than casual readers. If you buy 1 or 2 books a year, you wouldn’t pay for a membership; it is people who buy a large number of books who pay for membership (e.g., just before writing this essay, I preordered 1 hardcover and ordered 2 others). So why not reward members based on their buying? For example, buy 15 books and beginning with the book 16, you will get overnight shipping or an additional 5% discount or something. Buy 20 books and get a gift certificate. Think up rewards that encourage more buying and offer those rewards to members. Make membership valuable. It isn’t rocket science.

Much (but not all) of B&N’s problems are from a mismanaged ebook division. Even though ebooks aren’t the bulk of sales, B&N should not be conceding the market. It doesn’t take much imagination to figure out how to improve sales or get more Nook loyalty. A simple way is to make it so that when a person buys the hardcover they can get the ebook for $2 more if they would like both options. Buy the first ebook in a trilogy and if you buy books 2 and 3 at the same time, you get book 2 for 50% off and book 3 for free. Maybe these won’t work but they are worth exploring and cutting special deals with publishers to make them happen.

There are a lot of things that B&N — and publishers — can and should do to rejuvenate B&N. Unfortunately, these things require imagination, something B&N has in very short supply. Consequently, because I do not expect any miracles at B&N, I will continue to prepare its obituary. Maybe I’ll be fooled and my masterpiece will never see the light of the Internet; if so, I’ll be pleasantly surprised. But until B&N calls me and asks me for my ideas and calls other members and asks for their ideas, I won’t get my hopes up.

What would you do if given the opportunity to turn B&N around?