Yesterday Amazon officially took the cover off of the writing community which they’ve been developing without anyone noticing.

t seems to be just as much a writing community as it is a publishing program.

Update: An Amazon spokesperson told me in an email that “Write On and the new publishing program are different and unrelated programs.”

Amazon has been quietly working on Write On since at least March 2014. References to the program popped up on KBoards on 4 September, and in Amazon’s own forum on 28 August, but the most interesting detail is that some forum posts date to March of this year.

Before I cover the program, let me share a couple useful details. The Amazon Write On is now live at writeon.amazon.com, and if you’d like to check it out for yourself you can use this code to get in: X9RJTE9H.

Also, if you’ve already joined Write On, I would like to know what you think. 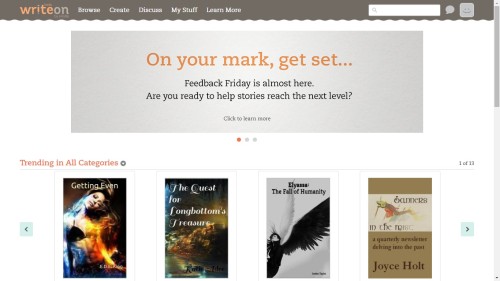 I have only had a chance to explore Write On for a few minutes, but based on that and on how Amazon is pitching it I would say that this is just as much a writing community .

I’ve used it for a few minutes, and I can report that it has sections where writers can upload their latest work. Readers can like or follow a work, and they can also leave comments and discuss specific details. There is also a discussion forum where authors can meet and discuss issues related to writing.

Here’s how Amazon described it in yesterday’s announcement in their forums:

It’s called Write On by Kindle, and it’s a community where readers and writers come together around the creative process to make good stories great and great stories better.

Whether you want to polish an original work, hone your feedback skills, or just find a group of other passionate readers and writers to connect with, we’re building a community that will support you. Plus, you’ll get a chance to help guide the direction of a new Kindle project that’s still in beta. It’ll be a little experimental, a little seat-of-our-pants, and hopefully a pretty sweet time for all involved.

In short, Amazon is testing crowd sourcing as a publishing idea, but they are  also going after writing communities like KBoards, Wattpad, and Absolute Write –  in two completely separate programs.