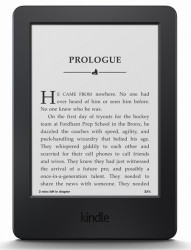 After 3 years of price cuts and waiting, Amazon has at last replaced their cheapest Kindle with a new model.

The Kindle (2014) features a somewhat faster processor, touchscreen, and additional storage, but no frontlight or high resolution screen. It’s running basically the same software as the Kindle Paperwhite was running last month, which means that the new Kindle is still lacking the many new features which Amazon promised to add in a firmware update this fall.

This is going to keep me from posting a complete review, but to be honest I am sufficiently ambivalent about this model that I would skip the review if I thought that were appropriate.

It’s not that it is a bad ereader, or that I hate it;  I don’t, really. My problem in writing this review is that aside from my initial distaste for the aesthetics of the shell and screen, the new Kindle has yet to make an impression.

Even after reading on it for a week, I can’t muster up an opinion beyond saying that it is a Kindle. It’s almost as if it disappeared into the background. For a reader that is in many ways a good thing (which is why I am noting it in the review), but it does make a reviewer’s job more difficult.

So what do I think?

When Amazon released their new basic Kindle, they replaced a 3 year old model with one that had a significantly simpler design which clearly cost less to build and was in many ways less appealing than its predecessor.

The new Kindle has a cheap plastic shell that eschews the smooth curves and rubberized rear shell found on earlier models in favor of bare plastic and a sharp angled rear shell. it’s also noticeably thicker than other Kindle models. I find the changes unattractive, but I can also see that the hardware design was intended to make the budget model less attractive than the Kindle Paperwhite, which cost $40 more.

This also explains why Amazon did not upgrade the screen resolution or add a frontlight, but luckily Amazon didn’t short change the Kindle when  comes to raw power.

I have found that the new Kindle is as fast as my Kindle Paperwhite (2013). It also has the same amount of storage as the latest iteration of the Paperwhite, and the option of using a smart cover.

I have been reading on it for a week, and while I am unimpressed that is not actually a bad thing. The reason I am not impressed is that I largely haven’t noticed the Kindle when I wasn’t specifically looking at it with a critical eye.

Amazon has been working on the Kindle software for the past 8 years, and in the new Kindle Amazon has achieved what Jeff Bezos has said was always their goal: to make the hardware disappear so that a reader only sees the words.

I can’t say exactly how that happened, but I do wonder whether the included smartcover, and the way it engendered a faux paperback reading experience, may have helped. (I plan to test this with by getting a similar cover for my Paperwhite.)

That said, I don’t plan to keep this Kindle, which was a loaner, nor would I buy one. I don’t like the hardware, and I find myself spoiled by the frontlight found on more expensive models and would much rather use an ereader that had one.