Pocketbook’s new 8″ ebook reader holds the dual distinction of being one of the more unusual ereaders to launch this year as well as the most delayed. Following an early and limited release in Russia, a wider launch was delayed so Pocketbook could respond to complaints about performance and screen quality. The European launch was pushed back until the middle of September, and then delayed again.

And now it is finally shipping (I hope). Pocketbook France informs me that they have started shipping the InkPad 840 to customers. (I’m still waiting on a tracking number for my unit, but that is what they have reported.)

That’s not as sharp as on the 6.8″ screen used by the Onyx T68 Lynx and Kobo Aura H2O, or the screen on the new Voyage, but the InkPad’s screen is also larger – a detail which I am sure is appreciated by PDF users . 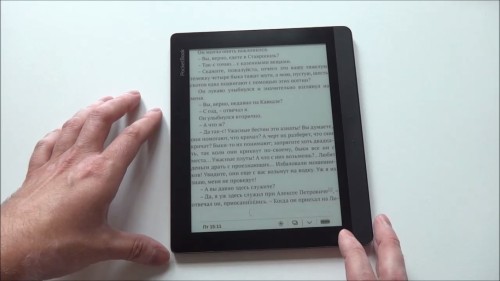 This ereader runs Pocketbook’s proprietary OS on a 1GHz CPU with 512MB RAM and 4GB internal storage. It also has Wifi, a microSD card slot, and a headphone jack. Weighing in at 350 grams, the InkPad measures 7.3mm thick and sports a 2.5Ah battery. And that 8″ screen also has a frontlight and capacitive touchscreen.

Like other PocketBook ereaders, it ships with support for a wide variety of ebook formats, including Epub, PDF, and Kindle (drm-free). Not all of those formats are well-supported, though, so I would not count on the InkPad as a multi-format device (this is one thing I learned from my review of the Pocketbook Ultra 650.) The InkPad also ships with a number of apps, including a web browser, file manager, calculator, several games (klondike, chess, sudoku), notpad, sketchpad, Dropbox, mp3 player, and others.

I’ve been wanting to buy an InkPad ever since it launched this summer, and I’ve been waiting for Pocketbook France to ship my order since early September. If and when it does arrive, I will be posting a review.

Until then, here are a trio of hands on videos which show the InkPad in relation to other ereaders and how it will look in a user’s hands.