This hasn’t been given much fanfare by Comixology, but Archie Comics has become the latest major publisher to become DRM-free on Comixology.

Anthony’s Notes noticed this week that there was an unheralded blurb on Comixology’s Tumblr with the news.  There’s no similar mention of Archie in the list of DRM-free publishers on the Comixolgy website, but the listings for titles from Archie Comics would seem to suggest that they can be downloaded as DRM-free PDF and CBZ. 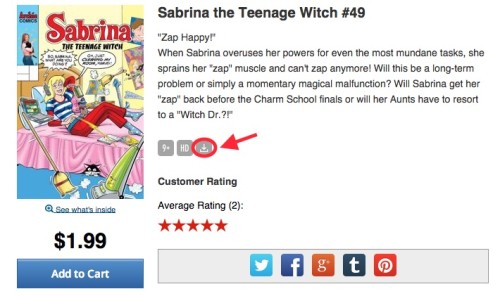 Comixology added an option for DRM-free comics this summer following years of requests from comic book fans. Before Comixology got on board, DRM-free digital comics were often associated with piracy, but could still be bought from smaller digital shops like DriveThruDigital or direct from some publishers (Image Comics, for example).

Now that Archie Comics has come over to the side of goodness and light, the remaining major monthly comic publishers that still encumber their digital comics with DRM include Marvel, DC, Boom! Studios, Bad Horse, Avatar Press, Zenescope, Viz, and part of Archaia’s line.