From the “What a great use of police resources Dept” …

Police in Germany reportedly conducted multiple raids this past week on operators of and subscribers to the ebook pirate sites Spiegelbest.me and eBookSpender.me.

Munich prosecutors told Der Spiegel and Golem.de that  between 45 and 50 homes were raided on Tuesday as part of an investigation into copyright violations and tax evasion. Police were seeking evidence of the operation and support of those pirate sites, and they reportedly seized hard drives, cell phones, ereaders, and other paraphernalia.

Given that both sites are now down (and only one was archived in the Wayback Machine), I can’t confirm many details. Der Spiegel reports that subscribers paid 5 euros per month for access to a catalog of 50,000 German language titles.

From what I can see of the one site I found in the Wayback Machine, ebookspender.me could well be a pirate site. But I can’t say that for sure without checking the files which aren’t available any more.

I can add that the whois records for both sites (one, two) lead back to the same name and email address belonging to a man in the German town of Bruhl. I suspect the name is either is fake or the guy is uninvolved/innocent, so I won’t mention it here, but I will note that not all of the people raided were involved in the operation of the pirate sites. 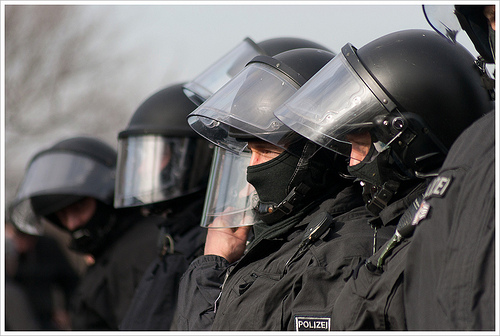 German lawyer Christian Solmecke covered this story on his law blog. He posted the search warrant which mentions that 30 of the 45 were moderators of the site, while the remaining 15 were described as users. There’s no way to say whether any of these parties were involved in any way, but I am beginning to have my suspicions that someone screwed up in some way.

There is a marked lack of information for this story, but as I got deeper into it this evening I found a couple huge red flags.

For example, one of the locations raided last week was the offices of a small tech company which offered a FOIA like service. That tech company also supports a TOR exit node, but as they reported on their blog they were told that they were raided because one of their employees was involved in the ebook pirate sites somehow (the employee’s home was also raided).

This, even though the tech company didn’t see any mention in the search warrant that the piracy was tied in some way to the company’s IP address.

That tech company also reported that the employee said he doesn’t own an ereader or any ebooks. But that didn’t stop the police from seizing 15 hard disks and three computers, including:

I would hope I am not the only one who questions the validity of a search warrant served at the workplace of a guy who says he doesn’t even own any ebooks. Tell me that doesn’t look sketchy, I dare you.

I am also still trying to understand the involvement of GVU (Gesellschaft zur Verfolgung von Urheberrechtsverletzungen), which was mentioned repeatedly in the news coverage. This industry trade group is a puppet/ally of the MPAA, a connection which does not incline me to trust them. This trade group is primarily interested in movie and game piracy, so I don’t understand why they would be involved in raids on an ebook piracy ring.

But never mind the MPAA connection; what’s really interesting is a report that GVU provided evidence in an unrelated piracy case last week. Der Speigel reports that 400 people were raided in relation to the pirate site Boerse – based on evidence provided by GVU.

Surely I’m not one who wonders exactly what role GVU played in the raids on the ebook piracy ring, and whether the evidence will stand up in court.

It’s too early to say for sure what will happen, but the raids last week have the stench of an industry trade group leading the police around by the nose. That has happened before in both the US and the UK, on repeated occasions, and it could be happening here.

P.S. If you follow this type of news in the German press, please do me the favor of sending me links as the story develops. I want to know what happens next.