Amazon strives to always be responsive to customer requests, but they also like to reduce costs by making their staff stick to scripts whenever possible, and sometimes this can result in absurd situations.

Graeme Reynolds recounted one such situation yesterday. At the request of a customer, Amazon has declared hyphenated words verboten in the Kindle Store:

Moonstruck has been out for around 18 months now. It’s done well for itself and, at the time of writing has around 123 reviews on Amazon.com, the overwhelming majority of which are four and five stars. Even the few people that have not liked the book have not had a go at the editing – and for good reason – I spent well over £1000 on getting that book edited, using the best editors I could find. I was more than happy with the product, so was bemused by this email. When I clicked on it to take a look inside my confusion grew.

Apparently Amazon had received a complaint from a reader about the fact that some of the words in the book were hyphenated. And when they ran an automated spell check against the manuscript they found that over 100 words in the 90,000 word novel contained that dreaded little line. This, apparently “significantly impacts the readability of your book” and, as a result “We have suppressed the book because of the combined impact to customers.”

Graeme goes on to relate that he explained what a hyphen was and how it was actually a valid part of the English language. Unfortunately, rather than encountering a living breathing human, Graeme received a message from one of Amazon’s bots, which sent off this automated script:

Thanks for contacting us and giving me the opportunity to help you. I will be more than glad to assist you with your inquiry.

As quality issues with your book negatively affect the reading experience, we have removed your title from sale until these issues are corrected. Books with serious errors that are not corrected after 60 days will have their product detail pages removed from the website. Your book will still appear in your Bookshelf, and you can update it and resubmit it at any time.

Once you correct hyphenated words, please republish your book and make it available for sale.

(Given the advance in AI, I would not be surprised if this really was sent by a bot.)

I can confirm that the book in question, High Moor 2: Moonstruck, is indeed missing from the Kindle Store.  As you can see, the listing shows the standard nonspecific message explaining that the ebook has been pulled. 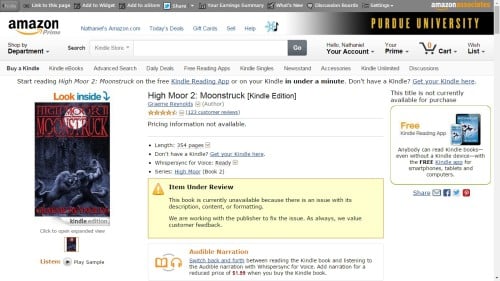 This isn’t the first time that Amazon has pulled a book on the complaint of a customer, but it is the most unusual. All of the previous incidents I had heard about involved formatting complaints, and not editorial decisions.

But clearly Amazon has moved on from setting minimum formatting standards to setting new rules for editorial quality, and who knows where it will end.

Now that hyphenated words are banned, the next obvious step could be to issue a proclamation on the correct use of the word “literally”, and after that Amazon might ban the use of British spelling.

But Amazon had better not forbid the use of the dangling participle; that is a decision up with which I will not put (to quote Churchill).

In case you had any doubt, yes, I am treating this incident with humor. While this is a nuisance for Graeme it is so utterly ridiculous that it deserves either scorn or satire. And since I would be willing to bet that Amazon will overrule the bot that pulled this ebook, I chose humor.

Update: The comment section of Graeme’s post has revealed that there may actually have been a real formatting issue. He was using minus signs in place of a dash, and that could cause problems when the text is read aloud. Rather than saying the words half-and-half, a TTS engine might say half minus and minus half.