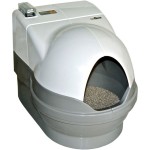 In the 5 years I have been writing this blog I have heard of some ridiculous uses for DRM, including printer ink cartridges, a car battery, and even coffee pods, but today I learned of a new use for DRM which makes all previous examples seem sane in comparison.

A company by the name of CatGenie has come up with the bright idea that the best way to build an automated litter box is to use DRM on the disposable cartridges of cleaning fluid. (I can’t confirm whether CatGenie was founded by engineers from a printer manufacturer but I would not be surprised.)

CatGenie makes one of the most popular automated cat litter boxes on the market. For those who haven’t seen one before, it works like this (play at your own risk):

That’s some nifty tech, but then CatGenie had to screw it up by adding DRM. Jorge Lopez writes over on Medium how he came to realize that he doesn’t actually own the CatGenie, but is renting it:

I’m usually very good about ordering a bunch of granules and cleaning solution. But one Friday evening, I found the CatGenie beeping, asking for more SaniSolution brand cleaning solution in SmartCartridge form. Unfortunately for me, I didn’t have any new ones, it seems I accidentally put a used one up on the shelf and I thought it was full.

I took the SmartCartridge and realized I could just open it up, and fill it myself. Great, I’ll order new ones and get it by Tuesday and I’ll just fill this one up with water for now. So I filled it up with water, and put it into the machine….

It didn’t stop beeping, it knew this wasn’t it’s SaniSolution. Somehow it knew. I wasn’t able to even force it to run without the solution. I did some Googling, and I found that the “Smart” in SmartCartridge is that it has an RFID chip inside of it to keep track of how much solution it has, and once it runs out, well, you can’t refill it. I honestly did not believe this and tore one of the cartridges apart, and there it was, looking back at me, a tiny chip holding up it’s little metal finger.

CatGenie has been making their litter boxes since at least 2007, so this isn’t a new outrage. And luckily CatGenie’s popularity and seven years worth of sales has resulted in an active hacker community, so the DRM is not that difficult to bypass.

But even though this is old news and a minor technical issue, it doesn’t change Lopez’s point about who really owns the device he bought:

This made me realize that I don’t actually own a CatGenie, I’m renting it. Though I paid for it, I have to pay per use yet I’m still responsible for all repairs until it craps out and I have to get another one. A tad disheartening.

I’ve made similar points about ebooks, but never has it sounded so ridiculous as when it is applied to a cat’s _litter_box_.

What’s next, will CatGenie integrate the DRM into cat food so that only its brand of cat food will be scooped up by the litter box?

Don’t roll your eyes at me; it’s the next logical step, and would you really want to bet someone isn’t trying to engineer such a type of DRM?