One of the high points for my trip to CES this year was finding the DaSung E-ink monitor hidden in the back of the  E-ink booth, and the other high point for this trip was _finally_ finding the Netronix booth and getting some one on one time with their latest prototypes. 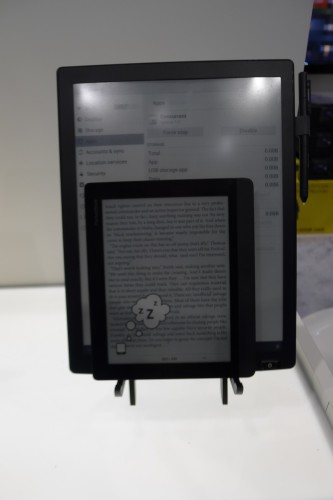 The above picture shows netronix’s 13.3″ prototype with my 8″ InkPad in front so you can see the difference in screen size.

Anyone who follows ereader news for long enough can tell you that Netronix is an old hand in the industry. They’ve been designing and building ereaders for years, and past and current partners include Kobo, B&N, Bookeen, and others.

Netronix was at CES 2015 to show off a couple new prototypes. They had a 13.3″ ereader and a 6.8″ ereader. Aside from the screen sizes, they had largely the same specs. Both ran Android 4.0.4 on a Freescale chip, and they had identical touchscreen tech: an IR touchscreen plus a stylus-friendly digitizer touchscreen. (For reference, the Sony Digital Paper DPT-S1 has a similar dual touchscreen.)

Both devices were also missing a silo for the stylus, which I see as a serious defect.

I found the Netronix booth via Charbax, who shot this video:

As you can see in the video, Charbax focuses on just the larger of the two devices. That’s okay; I got to play with them both.

Because Charbax focused on the larger unit in the video, I didn’t take very many photos.

The 6.8″ unit was also surprisingly light. As you can see in the photos at the end of the post, the smaller model bears a striking resemblance to the Kobo Aura H2O, only without the waterproofing and with a second touchscreen tech, Android 4.0.4, Google Play, and the stock apps (all of the apps were unfortunately inaccessible).

The accessible software included just a couple sketchpad apps, the reading app, and the settings menu. It was pretty basic. I thought the devices were a lot of fun to play with. I liked having two touchscreen options, although I am still bothered by the lack of a silo.

And BTW, I actually have quite a few photos of the settings menus; I’m not going to upload them right away (my mobile data plan isn’t very fast). Remind me later and I’ll get to it.