A number of different tech companies have tried to bridge paper and digital by adding augmented reality features to paper books over the years, and now MagicBook is giving it a go. I bumped into this young startup in the Eureka Park, where it was showing off its ideas for an augmented reality children’s book. 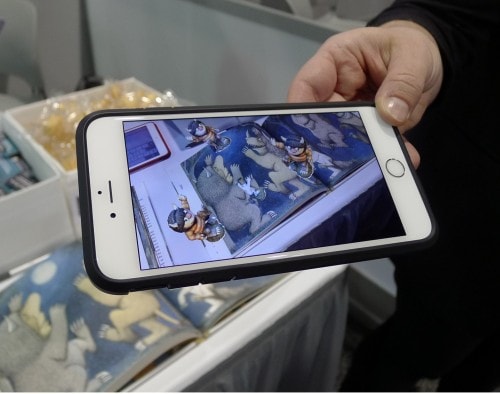 The tech is in the early stages of development, so there wasn’t much for me to see, but I can tell you that Magicbook is working on an app-based concept which could be made to work with any book (so long as the digital content exists).

All they had to demo was a couple pages made for the classic kid’s book, Where the Wild Things Are. In the demo I can make the trees grow in the bedroom, or see the monsters. All that is required for this trick to work is the book, the app running on a camera-equipped smartphone or tablet, and of course the digital extras.

That last will likely be a stumbling block for MagicBook; as we’ve seen from the general non-adoption of augmented reality over the years, few publishers are willing to invest in creating the content.

But the 4 person team behind MagicBook have high hopes that this won’t be an issue. They say that they’ve already received positive feedback from parents: