If you’re looking for a clunky and unstable app to view (but not edit) office docs on Android then I have some good news for you.

Earlier this week an alpha version of Libre Office for Android was launched on Google Play. It’s strictly a viewer app, so it’s not good for much, but it does let you open documents, spreadsheets, and basic presentations in Open Document and MS Office formats. 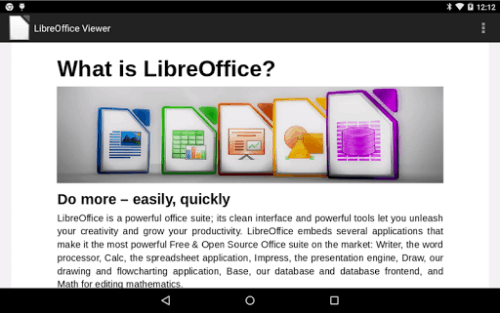 According to the announcement, not all features are supported, but the developers are planning to add more in future releases. I hope they also plan to make the app actually work; I tried and can’t get it to open even a simple DOC file.

Between 5 thousand and 10 thousand have downloaded the app since it was released yesterday.

AndrOpen Office, a free app based on Libre Office’s distant kin Open Office, has around 1 million to 5 million downloads in Google Play. It’s been out for a couple years now, and was updated a couple weeks ago (v1.6.5).