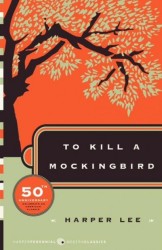 HarperCollins announced today that Harper Lee will soon be publishing a sequel to To Kill a Mockingbird, her seminal novel on racism and southern society. The book in question,  Go Set a Watchman, is due out this July.

PW reports that the sequel was originally written before To Kill a Mockingbird but was left sitting in a drawer for the past decades. It was only recently discovered by Lee’s lawyer, Tonja Carter.  The book is set 20 years after Mockingbird, and it details the experiences of Scout as a young adult.

“Scout (Jean Louise Finch) has returned to Maycomb from New York to visit her father, Atticus,” the publisher’s announcement reads. “She is forced to grapple with issues both personal and political as she tries to understand her father’s attitude toward society, and her own feelings about the place where she was born and spent her childhood.”

According to the publisher, the book will be released as she first wrote it, with no revisions. That is going to make it very interesting to this blogger, given that the editing process can sometimes drastically improve a book. Will the original unedited work stand up to scrutiny on its own?