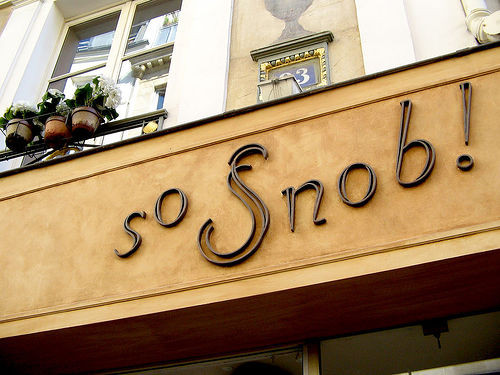 All those authors who didn’t get their start until later in life are no-talent hacks who are just wasting their time.

That’s the opinion of Ryan Boudinot, who just left a position as a teacher in an MFA program. He posted a piece  on The Stranger on Friday in which he revealed just how much he hates his former students.

According to Boudinot, there are certain people who meet his standards for being a writer, and woe be unto you if you try to go against his wishes. For example, if you’re not already a talented writer when you enter his program, you should just give up and go away. There’s no hope for you.

It’s simply that writers are not all born equal. The MFA student who is the Real Deal is exceedingly rare, and nothing excites a faculty adviser more than discovering one. I can count my Real Deal students on one hand, with fingers to spare.

And if you should happen to grow up poor or otherwise disadvantaged,  or for some other reason wait to try to become a writer until your adult years, Boudinot thinks you shouldn’t even bother. You’re going to fail:

But for most people, deciding to begin pursuing creative writing in one’s 30s or 40s is probably too late. Being a writer means developing a lifelong intimacy with language. You have to be crazy about books as a kid to establish the neural architecture required to write one.

And that’s not the only reason Boudinot thinks you should give up without making the attempt. If you don’t inhale the most difficult books then he doesn’t think you’re worth reading:

Without exception, my best students were the ones who read the hardest books I could assign and asked for more. One student, having finished his assigned books early, asked me to assign him three big novels for the period between semesters. Infinite Jest, 2666, and Gravity’s Rainbow, I told him, almost as a joke. He read all three and submitted an extra-credit essay, too. That guy was the Real Deal.

God forbid you should be dependent on your local public library for reading material; my library had only two of the three titles mentioned, so clearly no poor person in my area has a shot at meeting Boudinot’s standards.

Update: Out of curiosity, I found the 3 books mentioned above, and requested them at my library. One title, Infinite Jest, was available as an ebook so I got it and read it. This is a book which everyone should read, if only to learn how not to write a sentence, how to screw up pacing, and how the literary establishment doesn’t know what it is talking about.