With tablet prices dropping year after year, more and more libraries are lending tablets to their patrons. Unfortunately most consumer tablets aren’t study enough to survive long with this type of use, but Findaway World has the solution. Earlier this week this Cleveland-based company launched a new tablet which is specifically designed to be checked out to patrons.

The Playaway Launchpad is a 7″ Android tablet with a custom rugged shell. The price starts at $99, and it comes preloaded with content – but only for kids, and not adults. 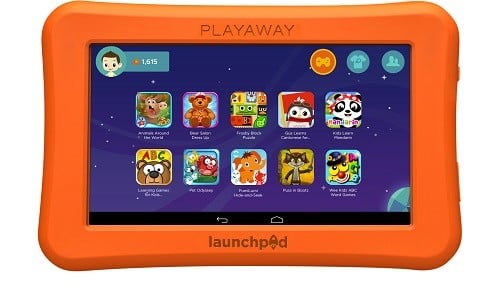 Building on their past experiences with developing limited use devices for libraries,  Findaway World has taken the idea of a locked-down kids tablet and gone one step further.

Each Launchpad features a curated selection of content focused on a single topic and age group. For example, the “A-Maze-ing Mind” unit features games which teach critical thinking skills to 3 to 5 year-olds.

The tablets lack Wifi or a camera, and they come locked so that patrons can’t tamper and install their own content. There’s also a simple one-touch reset feature which erases previous user data and requires no staff maintenance, ensuring Launchpad is always shelf-ready for the next check out.

While the Launchpad does represent a better value than Findaway World’s first media player, the Playaway View, the Launchpad doesn’t strike me as the better option than the kids tablet’s available on the consumer market. It might be easier to manage, but it’s not necessarily more rugged.

What’s more, the Launchpad is so limited in functionality that I don’t think it justifies the cost. If a library bought a $99 kids tablet, they could set up two locked down profiles: one for adults, and one for kids (plus a third admin profile which isn’t locked down). That would make the tablet at least ten times as useful, IMO.