Have you ever been frustrated by not knowing which cable to stick in which port on your laptop? Apple has a solution!

Meet the new Macbook. This 12″ laptop measures 13.1mm thin, weighs 2 pounds, and has just a single USB Type-C port (for both power and peripherals). That’s right, you get to buy all new peripherals! (or an adapter!) 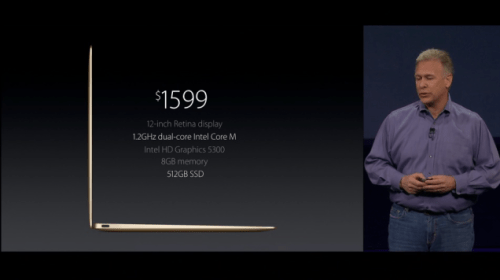 The new Macbook is going to split the differences between the 11″ and 13″ Macbook Airs. It runs OSX on a 1.1GHz dual-core Intel Core M CPU with 8GB RAM and 256GB storage. Screen resolution is the expected 2304 x 1440 (a Retina display) with edge-to-edge glass.

This laptop has Wifi, Bluetooth, a thinner screen, a pressure sensitive touchpad, and an edge-to-edge keyboard. The starting price is $1,399 for the model with the 1.1GHz CPU.

It’s going to ship in April, and curiously enough this new model won’t replace the existing Macbook Air or Pro.  They will stick around so that those who need more ports or CPU power will have options.

And that’s a good thing, because a single port just isn’t enough, IMO.

I have trouble seeing a laptop with a single port as a real working laptop and not an accessory like the iPad. There are times that I’ve had 4 or more items plugged into my laptop, and I can’t imagine the pain of having to cope with the single port on the new Macbook.

Luckily I won’t have to (it’s outside my price range) nor will anyone else be forced to cope. Apple is also updating the MacBook Pro and MacBook Air models starting today. They’re going to ship with 5th-gen Intel Core i5 or Core i7 Broadwell CPUs. The MacBook Pro 13″ is going to also get an extra hour of battery life (for a total of 10) and the new pressure sensitive trackpad found on the brad-new Macbook.