The Association of American Publishers released its year end statistics this morning, and publishers ended the year with a bang.

In terms of formats, hardback sales dipped in 2014 while both eBook and paperback revenues increased. I know that sounds contradictory, given that trade ebooks are seen as the new paperback, but the AAP’s member publishers reported that revenues from paperback sales were up 8.3%, to $2.1 billion, while ebook revenues were up 4.7%, to $1.6 billion. Hardback sales dropped by half a percent, from $2.57 billion to $2.56 billion.

All in all, this was a bumper year for this part of the digital publishing industry. 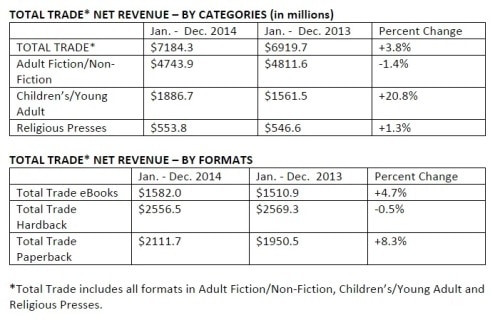