Google may operate the second largest app store in the world and serve a billion people in over 190 countries, but for the longest time that store was allowed to operate under Wild West rules. Just about anything short of malware was allowed free reign, but that’s beginning to change.

Google announced this morning that it would now review apps prior to publication. In fact, it actually started reviewing apps several months ago be having real people, including “a team of experts who are responsible for identifying violations of our developer policies ” examine the apps and pass judgement.

Alas, this review process doesn’t extend to ebooks, just apps, so the ebook section of Google Play Books will still be stuffed chock full of malware-ridden and pirated ebooks, but at least Google is raising their standards for the app section. 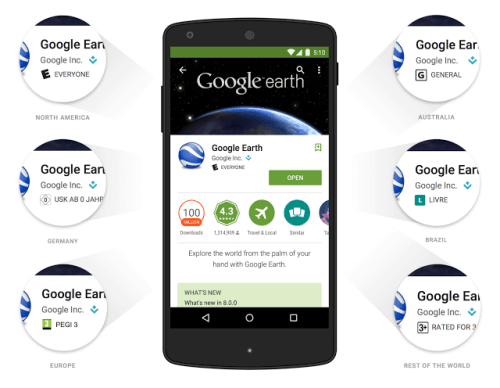 In related news, Google is also going to adopt the local rating system in each of their local markets.

Here in the US, for example, the apps will carry ab ESRB (Entertainment Software Rating Board) rating, while elsewhere users will find ratings from the Pan-European Game Information (PEGI), Australian Classification Board, Unterhaltungssoftware Selbstkontrolle (USK), and Classificação Indicativa (ClassInd).

Apps sold in markets which lack a specific ratings authority will display an age-based, generic rating.

TechCrunch reports that Google has actually been working to implement the new app review system for over 6 months now, and that it went live a couple months ago with few complaints and little notice. They quote Purnima Kochikar, Director of Business Development for Google Play, as saying that: “We started reviewing all apps and games before they’re published – it’s rolled out 100%.” The review process was so fast and efficient that “developers haven’t noticed the change.”

Part of the reason that the process is so fast is that it has largely been automated. Each app is scanned for malware and possible content violations. For example, the images, music, and videos in an app are scanned for possible copyright infringement as well as for adult material.

The automated process is helped by a new questionaire which Google is going to start requiring in May. Developers will have to  complete the new rating questionnaire for each of their apps, otherwise the apps will be marked as unrated and could be excluded from some markets. Come May, app updates and all new app releases will have to have a completed questionnaire before they can be published on Google Play.