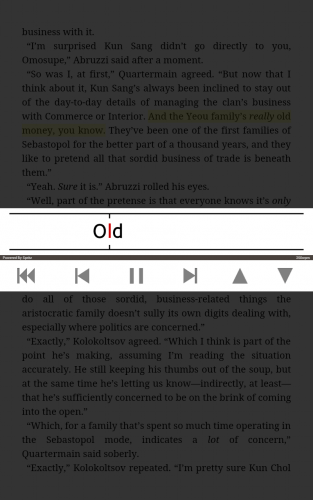 When I was working on that post earlier today on Instapaper’s new speed reading feature, I came across another app which added a similar feature to Android reading apps.

SpeedRead with Spritz is a 99 cent which uses Spitz’s speed reading service to offer an incredibly fast reading option.

The app works with just about any Android app which supports TTS by offering Spritz as an alternative TTS engine. I know that sounds strange, but it works. I bought the app and I’ve tested it with Google Play Books, and I can confirm that it does what it says.

For those new to Spritz, this company launched a speed reading service around this time last year which uses rapid serial visual presentation (RSVP), a 40-year-old speed reading technique, to help you read at a ridiculously fast pace.

RSVP works by flashing the text at you one word at a time, at rates ranging from 200 wpm to 700 wpm. This does help you read faster, but the technique has been shown to cause headaches, and it can also impact reading comprehension (the words move by your eye to fast for you to digest).

There are a bunch of similar apps in Google Play. You can find both paid and free alternatives, but so far as I can tell SpeedRead with Spritz is the only app which can integrate with other reading apps (I checked the other apps). The other apps support a variety of ebook formats, including FB2, PDF, and Epub. A couple of the apps will also let you import a webpage so you can read that speedily.

This particular app doesn’t work with every Android app, but the listing says that it works with Play Books, Pocket, Moon+ Reader, FBReader, and ezPDF.  This means that it supports DRMed Epub as well as FB2, PDF, and a bunch of other ebook and office formats.

Just so you know, I tried this app with the Kindle, Nook, and Kobo apps, but I couldn’t figure out how to enable TTS in those apps. (help?) And while we’re on the topic, Spritz has a list of mobile apps and online services which have its tech built in. It’s not a long list,though.

So tell me, have you tried this app, or used Spritz elsewhere?

I’ve tried Spritz when The Old Reader added Spritz integration, but I stopped almost immediately. I’m one of the people who get headaches from the flashing text.

But not everyone has that problem; what do you think?

You can find SpeedRead with Spritz in Google Play.