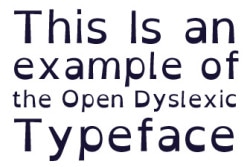 If you’re one of the millions of Americans with dyslexia then I have some good news for you.

OverDrive rolled out an update last week which added a new font option to its mobile apps. Install the new app and you’ll find that you can switch the font to OpenDyslexic.

You can see a sample of the font at right.

OpenDyslexic is one of a number of fontfaces which are intended help those with dyslexia better comprehend the words they are seeing. The fonts are drafted to emphasis certain parts of each character to make them easier to differentiate. Common design elements include giving certain parts of the characters thicker lines, varying the length of the projecting bits on characters like b, d, g and p, and slanting characters.

If this is your first encounter with OpenDyslexic, here’s a larger sample:

OpenDyslexic wasn’t the first dyslexic font, but it was the first released under an open source license. Other dyslexic fonts like Dyslexie are licensed at a high cost. All of the fonts have the same general goal, though: they’re supposed to make reading easier for people with dyslexia.

However, some experts don’t believe that the fonts help reading comprehension. As a layperson who doesn’t have dyslexia, I can’t tell you one way or another. But I do think it’s better to have options.

I’ve tested the font myself and can confirm that it works in OD’s iPad app. I can’t say the same for the Android app; I was able to select the font but it did not show up in the ebook. Hopefully I found a bug unique to my Android tablet, but if not then OD can always fix it in the next update.

You can find the app in iTunes and Google Play.