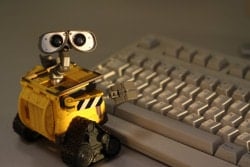 Secret messages hidden in personal ads are an old trope in spy and thriller stories, and you can find all sorts of online tools to create your own. And now thanks SCIpher, you can even embed a secret message in a notice for an academic conference.

Ten years ago, a few students at MIT got together and developed SCIgen, a tool for generating fake academic papers. They created it so they could test which conferences and journals would accept an academic paper that was nothing but gibberish (you would be surprised how often that happens; there is even a tool to filter out the fake papers, now).

The students went their different ways, but they got back together for the tenth anniversary of SCIgen and released SCIpher.

Like SCIgen, SCIpher uses context-free grammar filled with randomly generated computer science buzzwords, but rather than simply generating a completely random text SCIpher lets you supply a secret message which will be encoded into SCIpher’s output.

The output resembles a call for papers message which academic conferences send out to attract attendees and participants. Those messages are usually jargon-rich and difficult to read at the best of time, and now some of the calls for papers will be even more incomprehensible.

Given that anyone who downloads SCIpher can decode a message, it’s not exactly secure or even a secret, but its developers never really intended for it to be taken seriously.

Jeremy Stribling, one of the scientists behind SCHgen and SCIpher, said that he views SCIpher as a way to poke fun at conferences’ ridiculous, jargon-filled names.

“We combined almost-pronounceable acronyms with random buzzwords cribbed from the SCIgen grammar to evoke the kind of niche specialization that results from thousands of concurrent conferences clamoring for authors,” says Stribling. “Plus, while an encrypted email would be a big red flag for some investigators, in our experience when you send out a call for papers, it’s very unlikely that anyone will read it.”

You can find SCIpher on MIT’s servers, and if you would like to fiddle around with the source code you will find it over on GitHub.