Google’s Chrome web browser comes in 3 flavors for PCs: Stable, Beta, and Dev Channel. You can find the same 3 flavors of ChromeOS running on Chromebooks, and now Google has extended that to Android.

Chrome users who want to get an early look at the latest Chrome features on Android are in luck, because Google has just released Chrome Dev to Google Play. 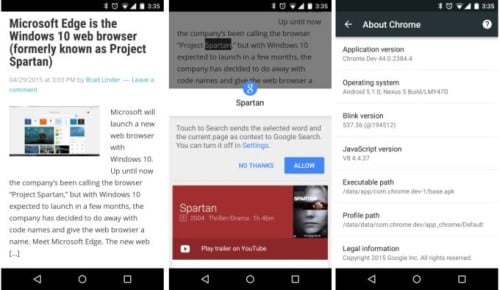 You can download the Dev version of Chrome and test all the latest features before they make their way to beta and stable releases.  Along with the cutting edge features you’ll also get a free sampling of bugs and other errors.

Have you tried the Dev build?

I have not. Truth be told, I don’t really care for Chrome much on Android. I prefer Dolphin, but I still use Chrome occasionally because it syncs with the Chrome running on my laptop.

In related news, Google also released a new security tool today. Password Alert is a new Chrome extension which warns you if you’ve entered your Google password on an unsecure webpage.

It’s designed to server as a first alert against phishing attacks. “Phishing should be a real concern for everyone — journalists, activists, companies, or individuals,” says Justin Kosslyn, a product manager at Google Ideas. “This is a useful and quiet line of defense against a real challenge.”

The extension monitors what you type into your web browser and compares it to a hashed version of your Google password. If it finds a match the extension sends you to a warning page where you will be asked to reset your password. It won’t force you to do so, but it does serve as a useful warning that you may have been tricked into handing over your Google login details to a scammer.

Pasword Alert only works to protect your Google password, but it is open source so it is possible for other developers to adapt it to other systems.