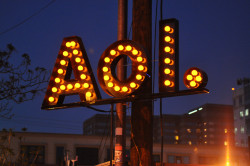 Techcrunch reported Tuesday morning that its parent company, AOL, is about to be bought by the US telecom Verizon. According to the memo they got from AOL CEO Tim Armstrong, Verizon is paying $4.4 billion for the 30-year-old company.

The tech company is going to become a subsidiary of Verizon as part of the deal, and Armstrong will stay on as CEO of AOL.

In addition to AOL’s vestigial (but still very profitable) dial-up internet service, the company also has an ad network, tools for marketers, and a blog group. Over the past 6 years AOL has bought or built a number of media properties, including Engadget, Techcrunch, TUAW, Makers, and Huffington Post. AOL’s other media properties include Moviefone, Mapquest, and Advertising.com.

AOL generated around $625 million in revenue last quarter. Three-quarters  of the revenue came from adverts, with the rest coming from the 2.2 million dial-up subscribers. The bulk of the profit comes from the subscribers and not the ads.

That actually comes as no surprise; the business of selling internet access has low overhead costs. Verizon’s FiOS and other internet services are similarly profitable. Verizon reported $32 billion in revenue last quarter, with a profit of around $5 billion.

Clearly Verizon isn’t buying AOL for its customer base but rather the tech. Business Insider believes that Verizon wanted AOL for its streaming video tech:

“Over-the-top” is broadband industry jargon that refers to the way consumers are increasingly preferring to get their video from the internet rather than from traditional television. (Their video comes “over the top” of television, in other words.)

Verizon provides both traditional cable TV service and broadband internet service, as well as mobile wireless service. But the audience tide has long been slowly ebbing from old TV model into a scattering of services such as Hulu and Netflix and the (illegal) Pirate Bay, which let people watch video when they want, wherever they want, without having to sit in front of a TV in their living room.

That would make a lot of sense.

If you happen to follow this kind of thing then you might recall there were rumors (denied by Verizon) earlier this year that Verizon was interested in buying AOL. Techcrunch says they heard similar rumors. Their sources said that the sticking point was whether Verizon would buy all of AOL or just part of the company.

That issue appears to have been put to one side for now, but it could be a sign that Verizon will soon sell off the unwanted bits and pieces. Hopefully that will include AOL’s blogs; Verizon doesn’t have a good history with a free and independent press. Late last year it started a tech blog and then forbid any coverage of net neutrality.

This story is still developing, and AOL plans to hold a company-wide meeting this morning at 10 am eastern. If you want to know more, you might want to check Periscope for the video stream.