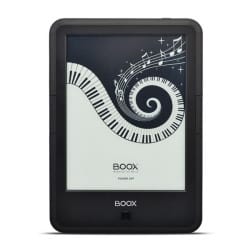 The Chinese gadget retailer Banggood is now listing a new version of the Onyx Boox C67ML. This ereader launched last November with a Pearl E-ink screen and 4GB of storage, but the new model has a newer screen and additional storage.

According to Banggood, the Onyx Boox C67ML Carta (that’s the model name) runs Android 4.22 Jelly Bean a dual-core 1.2GHz CPU with 512MB RAM and 8GB internal storage. It also has Wifi, a microSD card slot, and a headphone jack.

Weighing in at 225 grams, the C67ML Carta measures 8.7mm thick and has a 1.7Ah battery. Unlike the earlier model, there’s no mention of Google Play in the product listing.

All in all, this ereader is almost identical to the earlier model. The main difference is that the new one has a Carta E-ink screen (1024 x 758 resolution) and a slightly higher price tag.

The C67ML Carta is listed for $146, while the older model with the Pearl E-ink screen and 4GB of storage costs $124 (and yes, it is still available).

Given that the two models are so similar, it is difficult to suggest one over the other. The better screen and additional storage would be a nice bonus, but to be honest I have been quite happy with Pearl E-ink screens.

All other details being equal, I’m not sure I would pay extra for the new model.