With a screen measuring under 2″ diagonally, there isn’t much that you can do with a device like Apple’s smartwatch but that hasn’t stopped some reading app developers from finding ways to use it.

Instapaper, for example, lets you control its TTS feature from the iWatch. The social reading app Glose added a speed reading feature. And now Wattpad has released its app for the iWatch. 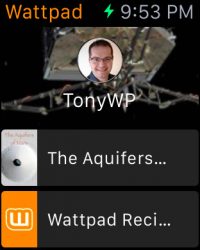 Wattpad’s app won’t let you write on the iWatch, but it will let authors track their stats. The new app pairs with the Wattpad app for the iPhone, and according to Wattpad:

The Wattpad team created this app for on-the-go writers who love keeping tabs on their latest stats. For writers, votes and read counts serve as a way to understand a story’s momentum, and seeing a spike in votes and reads often encourages them to keep writing.

The Wattpad app for Apple Watch gives writers real-time story analytics including total cumulative read and vote counts, as well as percent increases between app checks so they can keep track of readers’ reactions to their stories.

I can’t speak for you but that strikes this stats-obsessed blogger as a great idea. I really do obsess over my site’s traffic to the same degree that authors track their reading and sales stats, so I do appreciate the tool Wattpad has placed on author’s wrists.

alas, Google Analytics hasn’t released a similar iWatch app, so I will be forced to sit back and be jealous.