After years of investment by Amazon, Audible has a dominant position in downloadable audiobooks. And now they’re cashing in.

Spiegel reported on Friday that Audible is pressuring unnamed German publishers to agree to a new contract. No one has shared the specifics of the new contract, but it is said to include a flat-rate royalty offer which is backed by a threat that Audible would stop carrying those publishers’ audiobooks if they did not go along.

This story has been reported by several German news sites, but all point back to the Spiegel story. As such, we should take it with a grain of salt.

On the one hand, this does sound similar to the new contract that Audible summarily announced in February 2014, but on the other hand the publishers could be using this news story as a way to bring public pressure against Amazon. 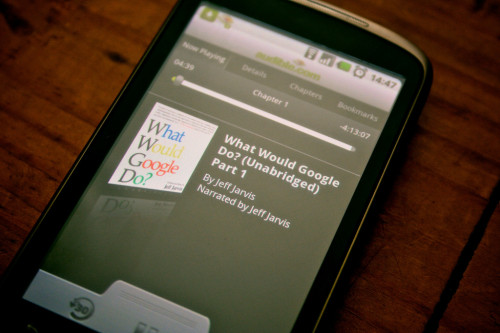 Early last year Audible decided to replace the incentive-based royalty offered through its ACX publisher’s portal with a new one which paid a flat 40% or 25%. The old deal paid as much as 90% to the publishers with the best-performing titles, while the new contract paid 40% for titles distributed exclusively through Audible, and 25% for non-exclusive titles.

And now we have a report that Audible is pushing a similar deal on German publishers. And they’re not happy.

According to Spiegel, the publishers have considered filing a complaint with the Bundeskartellamt, the German Federal Cartel Office. Spiegel quotes the head of Börsenverein, the German book industry trade group, as wanting to file an antitrust complaint on the basis that Audible is using its 90% share of the German (downloadable) audiobook market to illegally  pressure publishers.

That could well be true, but my gut says that the publishers are actually trying to cause bad publicity for Amazon as a negotiating tactic.

A similar tactic was attempted last year during Amazon’s negotiations with Bonnier.  That eventually came to naught, and I expect that the current threat of filing an antitrust complaint will amount to as little.