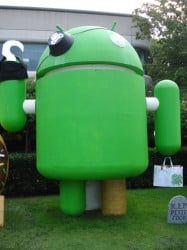 Google has a serious problem with piracy in Google Play Books.

Google’s only response so far has been to release a statement saying that “Google Play takes piracy seriously”. It hasn’t changed its policies in response to my news stories, and it hasn’t taken any active steps to fight piracy when American authors and publishers complain.

And now Google has made it clear that it won’t even take the complaints of a European publisher seriously.

I just got an email from a digital account manager from a Dutch publishing house. He exchanged emails with a senior account manager concerning an obvious pirate ebook account.

He was told by the Google Play Books rep that:

I checked the link you’ve shared and noticed that the book in question has been submitted to Google Books by dragonletebooks, through their Partner Program account. As we are not authorized to make changes to a book submitted by a partner through their account, I’d recommend you to contact the publisher directly to request removal of this book. If contacting them doesn’t help, and you believe that this listing violates your rights as a copyright holder, you can file a formal legal complaint and our legal team will review the notice promptly.

This is utter bollocks, and it is utterly reprehensible that Google refuses to take any active steps.

This is one of those cases where the pirate has set up its own shop in Google Play Books. The perp picks a bogus author name (in this case Flamanca Hollanda), and uploaded pirated ebooks under that author name.

This is a problem I documented at length when I first broke the news on piracy in Google Play Books, and pirates are still using it to their advantage. Thanks to how Google organizes Google Play Books, the pirate has its own shop which only lists pirated ebooks, including Dutch translations of John Grisham, James Patterson, Stephen King, and more: 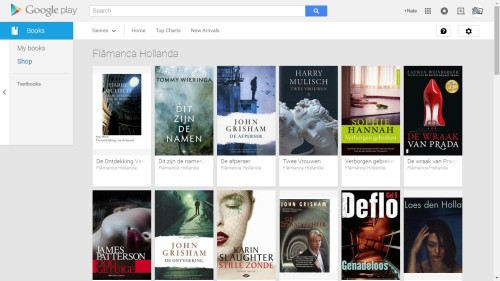 Just to be clear, the pirate in question is so obvious that it can be identified algorithmically, much less be identified by anyone with the brains of a goldfish.

And Google won’t do anything other than respond to specific DMCA notices (whereas Amazon and Scribd, to name a couple of examples, do use algorithms to filter pirated and other content out of their respective ebookstores).

But that may be changing soon.

This issue hasn’t gotten much press coverage in English (IB Times is the only news site to pick up the story), but the Dutch publishing news site Boekblad reported on this issue today and they say that NUV is working on the case.

The NUV, or Nederlands Uitgeversverbond, is a Dutch publishers trade group. The fact that they are interested should worry Google, because while Google can ignore me and it can ignore the complaints of individual publishers, it cannot ignore a trade group like the NUV.

Should the NUV threaten to sue, Google will have to change its policies and actually do something about the rampant piracy problem in Google Play Books.

Isn’t it a shame that nothing short of a lawsuit will get Google’s attention?