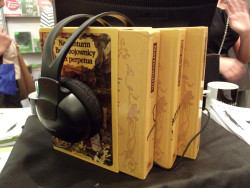 When I broke the news on Friday that Audible was sparring with German publishers over audiobook contracts, I had little solid info to report other than Boersenverein, the German book industry trade group, making a threat to file an antitrust complaint.

It’s now four days later and new details have emerged. To start, The Bookseller has posted the public statement released by Audible (it’s the usual meaningless fluff), but more importantly Boersenblatt has followed up with several German publishers and confirmed the general details of the initial report.

Unless Google Transtate is tripping me up, the CEO of Leipzig Book Radio Verlag has confirmed the existence of the new contract terms. Johannes Ackner didn’t share specifics, but he is quoted as saying “Our titles will be in the new subscription-pool”. Peter Bosnic, Commercial Director of Steinbach Talking Books, is also cited, but there is no mention of whether that company had acquiesced to the contract.

Update: Daniel Lenz with Buch Report is disputing the above paragraph. He says that the new contract is has less to do with a flat royalty than a new subscription plan which lets subscribers pay a flat monthly fee and stream as many titles as they want. (I have trouble beleiving that this would crop up in Germany but not be reported here in the US.)

We don’t know whether Audible is pushing those contract terms on German publishers, but we do know that the audiobook middleman Bookwire has declined to sign the new contract. John Ruhrmann , Director of Business Development & Sales at Bookwire, told Boersenblatt that Bookwire had not been offered  the new contract. The distributor had already informed its publisher clients that its relationship with Audible was over.

Bookwire is also considering filing that antitrust complaint (this was mentioned on Friday but wasn’t clear) on the basis that Audible has a 90% share of the German audiobook market. It is this potential complaint which the Boersenverein promised to support.

While it might sound scary that Audible is using its supposed 90% share of the audiobook market as a club, the facts don’t back up the FUD.

Audible’s supposed 90% share of the audiobook market is actually an 18% share – of a market which accounted for 4.2% of all book sales in Germany in 2014. That is a solid position in the German audiobook market, but is it enough to earn the attention of German regulators?

That remains to be seen.