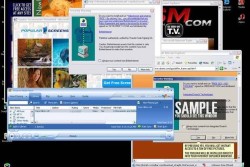 Many blogs reported on Eyeo’s new Android web browser with its integrated ad blocking tech on Wednesday, but far fewer caught the other story.

According to Computer World, Eyeo is also working on a web browser for iOS:

Eyeo is also working on an iOS version of the browser, which it hopes to make available during the third quarter.

“Developing on iOS is new and a little more difficult for us. But we are well on our way,” Williams said.

I missed this detail myself on Wednesday, but caught it when CW’s piece passed through my RSS feeds. And I’m glad that I have it, because now I know that the options for blocking ads are far more limited on iOS than on Android.

Safari doesn’t support any ad blocking plugins. Firefox only just now released its iOS app in beta, and there’s no obvious way to install an ad blocking extension in Chrome for IOS (I can’t find it) or Opera Mini (ditto).

Edit: No, Apple will allow ad blocking apps (much to my surprise).

You might think that a web browser with integrated ad blocking tech would be useful for iOS. I agree, so I went and found some. It turns out that there are several easy to find web browsers which offer ad blocking as an integrated feature:

And those are just the three web browsers which turned up in a cursory search; I’m sure there are more.

Have you tried one?

I don’t use a web browser much on my iPad so I can’t speak as to their value, but I did note that the two free options are rated at four plus stars.  And in all honesty, I would much prefer to block ads inside apps than in a web browser. After all, I do spend more time on my iPad in apps than browsing the web.

What did you think of the browsers?