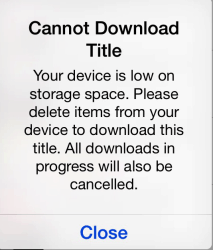 A bug report concerning Audible’s app for the iPad and iPhone crossed my desk this morning, and I was wondering whether anyone else was seeing this problem.

A reader tells me that:

I was just wondering if you’ve heard of the bugs infesting the last three updates of the Audible iOS app?

The original bug was reported to the Audible team 3 weeks ago, and since then two updates have been released with the same bug. Basically, when attempting to download certain files from the cloud, I’ll get a pop-up saying the device doesn’t have enough storage even though I have more than 15GB of space on my device (certainly way more than what each individual file consumes).

As you cans see in the following screenshots, she has over 15GB of free storage. Since audiobooks rarely exceed 400MB, that should be more than enough.

I haven’t seen this bug myself, although that doesn’t mean much; I don’t use my Audible app enough for my vote to matter. But I can report that Audible rolled out an update just yesterday which was supposed to fix a whole host of errors, including audiobooks being spontaneously being market as unread, a general inability to open the app, and that disappearing bookmark issue from last week.

So have you encountered the memory issue? What about the other problems?

Did the most recent update fix the problems?