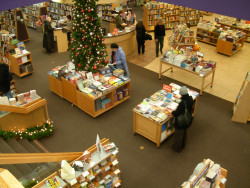 Some four months have passed since B&N announced plans to spin off its college stores into a separately owned company called B&N Education.

There has not been much news to report on the topic since then, but Shelf Awareness noticed this week that Barnes & Noble filed an updated prospectus with the SEC.

The short version is that B&N is still pushing forward, the new company will be owned by the same stockholders as B&N, and the same people named in February are still going to be running B&N Education. Also, B&N has picked up 3 additional contracts to run college stores (717 stores in total).

If you want to read it, SA detailed the prospectus at length. I was going to write it up myself, but a spot check of the older copies of the prospectus doesn’t show many significant differences.

There are a few financial details worth noting:

Sales at stores open at least a year fell 0.7%, affected by an increase in textbook rentals, which was partly offset by stronger emblematic apparel sales.

As of the end of January, B&N Education operated 717 stores, which reach 24% of the total number of college students in the U.S.–about five million students. The company has 455 contracts to operate the stores, some of which cover multiple locations, and 158 of the stores are co-branded with the Barnes & Noble name. B&N Education estimates that its 717 stores are 16% of the number of college stores run nationwide.

The prospectus is highly optimistic as to the new company’s prospects.

I, on the other hand, can see that B&N Education faces strong competition in a declining market. It’s not just that students are buying less from their college bookstores, or that B&N Education’s digital textbook offering is a train wreck, but also that it has a couple established competitors (Follett, Nebraska Book Co) as well as an aggressive newcomer with extensive retail experience and a kill-all-the-prisoners attitude.

Amazon is aggressively soliciting colleges to let it run a virtual bookstore on campus (like the one at Purdue University). They only run a few stores at the moment but as B&N reported in its prospectus the market is wide open. According to B&N, 53% colleges still run their own bookstores. While that is a prime opportunity for B&N, it’s also fertile field for Amazon.