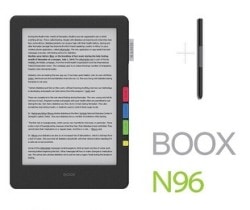 The Chinese ereader maker Onyx is currently exhibiting at the Taipei Electronics Show this week and it looks like they’re showing off new hardware. An eagle-eyed MobileRead member noticed that the signs in Onyx’s booth mention what could be new 8″, 6.8″, and 9.7″ ereader models as well as what could be a replacement for the Midia E-ink smartphone that was briefly available in 2013.

While I can’t find much new about some of the devices, I did notice that the new i86 released last month in Europe is mentioned as the i86 Plus. I can also add that the Computex Taipei website does have details on the N96, including an unreadable product sheet and an incomplete specs list.

So far as I can see, the N96 is effectively identical to the existing model, the Boox M96C. Both units run Android 4.0, sport a 9.7″ E-ink screen (1200 x 825 resolution) with touchscreen. They both have Wifi, touchscreen, 8GB internal storage, and audio. 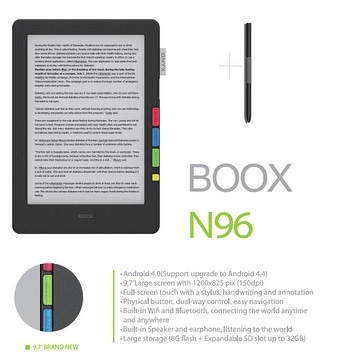 Just about the only obvious difference is that the N96 has colorful buttons to one side of the screen, while the M96 does not.

I suspect that the N96 is running on a dual-core CPU and not a single-core CPU like the M96, but until Charbax or someone can make their way over to the Onyx booth we just won’t know for sure.