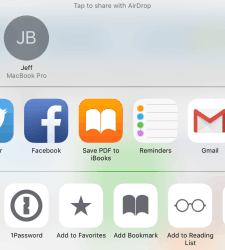 iOS has long supported many ways for you to share the content you’re browsing, and iOS 9 is going to add a new one. iDownload blog has noticed that the latest beta release of iOS 9 includes an option to save a webpage in Safari as a PDF and transfer it to iBooks.

iBooks (and not other ebook apps) was the only option offered, but on the plus side this sharing option has also been sighted in other Apple apps, including Photos and Notes. That means that this new option is going to allow users to easily turn a webpage or other document into a very adequate PDF in seconds.

Getting that PDF out of iBooks is going to be a little more difficult, but iBooks will let you email the PDF so you can always simply send it to your inbox and work from there.

Here’s what a webpage will look like in Safari, and then after the PDF has been opened in iBooks:

iOS 8.4 is expected to drop this week and bring iBooks textbook support to the iPhone, but iOS 9 won’t be coming until this fall (if not later).

Along with the new sharing option, iOS 9 will also have the Apple News app. That app is going to give readers a new way to find the latest stories, and it’s also going to offer web publishers a new source of revenue.

Another iOS 9 I’m looking forward to is the new split-screen and multi-window modes Apple showed off a few weeks back. The split-screen feature is going to let iPad Air 2 owners run two apps at once, but the rest of us iPad owners will be limited to only enjoying the slide-over feature and watching videos in their own pop out window.