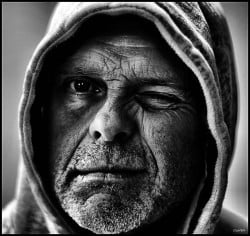 The hot news story on Twitter this Monday morning comes courtesy of the NY Times, which reported on Saturday that WI Governor Scott Walker has challenged  US Supreme Court justices to a fist fight.

Wisconsin Governor Scott Walker (R) isn’t having any of it. “I believe this Supreme Court decision is a grave mistake,” he said in a statement released by his presidential “testing the waters” committee Friday afternoon. Walker blamed “five unelected judges” for redefining marriage, and said the only alternative left is for an amendment to the U.S. Constitution reaffirming the ability of states to define marriage.

As entertaining as this story might be, none of it is true. Walker hasn’t threatened to attack judges, and best of all:

That story isn’t from the NY Times. It’s from a site which is tricking a lot of people into sharing fake news.

The site in question, NYTimes.com.co, is clearly not a real news site. It’s reporting hot stories which have not been covered by a known news source like AP, Reuters, or the Washington Post, and it is carrying stories which cannot be found on the real NY Times website at NYTimes.com.

I haven’t been able to identify the tricksters responsible, but I can point out that the content is actually pulled from another site, and that whoever runs this site has put less effort into designing and building it than most people put into their personal blogs.  They’re also running multiple clones of the one site under different domains (more on this later).

If you click through to that Walker article and scroll down, you’ll see a link at the end which  leads to National Report. Obviously someone has taken the RSS feed from that known parody site and used it to populate a site which looks like it was built in around 15 minutes late one Friday night: 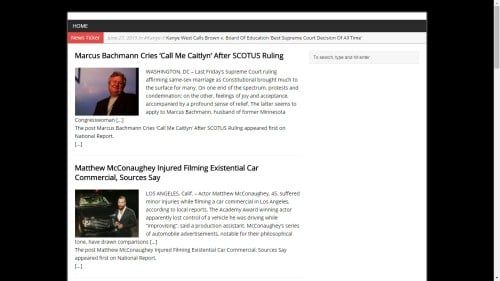 And in spite of the obvious fakeness of the site and the fact the content is drawn from elsewhere, people are falling for it.

The news industry insider blog Romenesko reported on Sunday that these stories are being shared on Facebook as legit NY Times articles, and I can confirm that people were sharing that Walker story on Twitter and talking about it like it was real.

While I am sure some of the tweets are in jest (mine would be), many of the tweets have a serious tone. These people sound like they believe the parody article is real, which is why I thought it worth a post.

Someone is having a joke at the reader’s expense, and while we don’t know who I do have an idea as to why. Romenesko reported that the “bogus news site is trying to inoculate the Right and confuse the Left––and everyone else”, but I’m not sure that is correct.

According to the site’s about page:

This website is in no way affiliated with http://nytimes.com.  All content contained within has been reposted with the express written consent of the copyright holder.  If you are interested in acquiring this domain, please visit the ‘Purchase this Domain’ link.

I can’t find that link, which means that whoever is squatting on the domain is making enough off the advertising that they don’t want to give up the domain.

Fortunately for gullible news readers, this trickster is going to lose the domain in the long run. ICANN has a procedure which trademark owners can use to seize domains from squatters. it’s not simple, cheap or fast, but if The NY Times Company wants this domain they will be able to take it away.

And the same goes for the other domains run by this trickster.

I was fact-checking that Walker story while I was researching this post when I discovered that the faux NY Times site mentioned above is just one of many. The same tricksters are running identical sites at different domains, including:

There could be more sites, but they aren’t showing up in either Google or DuckDuckGo.

Like I reported last week, one can’t always trust what one reads in the news. We need to doubt and question all news stories otherwise we would be taken by tricksters.

In the case of the faux websites mentioned above, readers really should have asked themselves why august publications were using such bare bones websites. That alone should have been enough to make them doubt the articles. Furthermore, five minutes with a search engine would have revealed that no legit source was reporting the story, thus revealing it to be bogus.