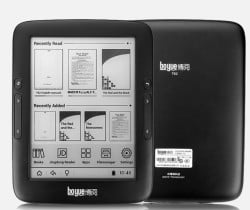 Boyue might not be well-known outside of the hard-core ereader community, but in that sphere it is making a name for itself. Over the past several years it has released several ereaders, including (by mid-2015) several models which run Android.

The T62 is the second of the two Android ereaders, and it was released in September 2014 (several months after the T61). I had intended to post a review in the first few weeks but let my self be delayed by other devices, more important issues, and life in general.

Then I just put it aside, before picking it up again in May 2015.  I had planned to write a review as a way of prepping for the Onyx Boox i86ML, but then I put the T62  aside again.

As I sit here writing this post in July 2015, I’ve come to the conclusion that for some undefinable reason I don’t like this device. I can’t put it into words, but I really don’t care for it. I don’t hate it – that I would be able to express.

This is not a bad ereader. I can’t recommend buying one but if you got stuck with one then I would honestly say you could do worse.

In many ways the T62 is a much improved update to the T61 (which I liked). It is heavier and slightly larger, and it has a better frontlight and smoother design. And it runs Android 4.2 on a dual-core CPU, giving it a lot of power and the option to install 3rd-party reading apps.

But I don’t like it. I guess the best word to express my feeling would be meh, and so I am posting this incomplete unreview.

Maybe I’ll like it more after I hack it?

There’s a small community of Boyue hackers on MobileRead. They’ve put out several modified firmwares, and I’m sure there’s one for the T62.

I’m going to look into the possibility, and if I find something interesting I will post it.

Last fall you could find the Boyue T62 at Banggood (China), but it is currently out of stock. Energy Sistem (Spain) has rebranded the T62 as the eReader Pro. And I think Icarus had this model for a time before they upgraded to the next model (with a Carta E-ink screen).