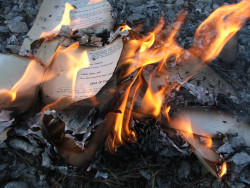 The LATimes reported on Monday that a rabbi is Sacramento is calling for Amazon to stop carrying books which deny the Holocaust:

Rabbi Mendy Cohen, the co-founder of Chabad of Sacramento, says the online retailer should pull the books from its inventory. He told the station that he is the descendant of a Holocaust victim, saying, “My great-grandfather was burnt in a synagogue alive with 500 Jews that the Nazis burned.”

Cohen’s plea comes days after Amazon pulled merchandise depicting the Confederate flag from its site. The flag is widely seen as a symbol of racism, and has been adopted by some white supremacist groups as an emblem.

Several books by Holocaust deniers are currently available for purchase through Amazon. Richard Harwood’s “Did Six Million Really Die?: The Truth at Last,” a 1974 pamphlet that has been banned in Germany, is ranked No. 78 on the retailer’s list of bestselling Kindle books about the Holocaust.

See, this is why it was a bad idea to pull the confederate flag merchandise.

Many may have cheered when Amazon and other retailers pulled the flag from their shelves in response to the Charleston massacre, but that action has put the retailers on the slippery slope towards censoring free speech.

if they can be pressured into removing one type of objectionable merchandise, it was only a matter of time before a special-interest group started demanding that Amazon cater to their whim and remove more items.

I’d bet that few readers will care much that these Holocaust books might get pulled but you should care where this will inevitably lead.

Today the objections are raised over Holocaust denial; tomorrow it will be violent video games.

And the day after that it will be erotica, then the Bible (it advocates child abuse and domestic violence). And after that the book section at your favorite retailer is going to get awfully thin as the gimlet eye of one special-interest group or another focuses on the books they don’t like.

Do you really want to go down that path?

As fascinating as we might find book-burning as a historical event, I think we should keep it in the history books rather than revive the concept with a 21st-century twist.