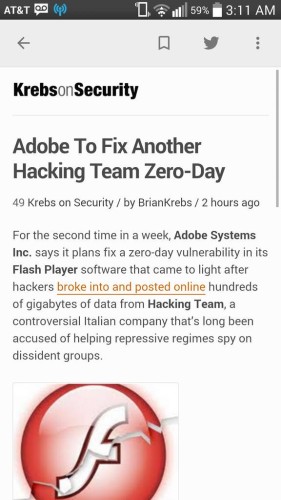 With the announcement of Apple News and Facebook Instant Articles earlier this year, RSS is going through a revival the likes of which we haven’t seen since the death of Google Reader in 2013.

And Feedly is poised to take advantage. I’ve just learned that Feedly is currently beta testing a publisher toolkit which will give web publishers more control over how their articles look in Feedly.

Tim Cushing of Techdirt noticed this week that posts from Krebs on Security looked vastly better on Feedly than did posts from other blogs.

@TimCushing they have early access to our publisher kit. Will come out of beta in a couple of months.

As we can see in the screenshot the toolkit offers several subtle tweaks like Kreb’s logo in the post’s header, and color links. (In contrast, when it comes to other sites like this blog, Feedly is ignoring the CSS formatting integrated into the RSS feed, including image and text alignment tags – but they’re promising to fix that.)

I would like to report more details, but Feedly isn’t ready to talk about the publisher toolkit yet. Feedly CEO Edwin Khodabakchian told me by email that it is still a work in progress.

However, I can report a few details from when Feedly was last working on a publisher toolkit; this might shed some light on their thinking.

Back in 2009 (when Feedly was still in the shadow of the all-powerful Google Reader), Feedly mentioned a publisher SDK on their blog. That SDK gave web publishers the option of inserting a sponsor module which could be used for cross promotion with a publisher’s other feed, displaying Amazon affiliate links, or a promo message.

Or at least those are the features that Feedly wanted to offer; I don’t see that they are offered now, and in fact they may not have been worth developing while Google Reader was still around. Feedly was still a nobody at that point, so publishers would have little reason to make the effort.

Feedly didn’t become important until about 5 minutes into the Readerpocalypse in March 2013. That’s when Feedly’s userbase really started growing. This would have been a good time to gain the support of web publishers,but I don’t see that Feedly mentioned this SDK in 2013 when they announced the Feedly API.

That API was focused on helping developers create apps for readers, and not giving publishers more options, and in retrospect that was an error on the part of Feedly.

It’s now 2015, and thanks to the announcement of FB Instant Articles and Apple News Feedly is no longer the top dog. A couple huge tech companies are moving into the opportunity created when Google shut down Google Reader in 2013 *, and both FB and Apple are vastly more appealing to web publishers.

Apple and Facebook each hold out the promise of money from adverts. It’s only a promise at this point, but it is vastly more appealing than what Feedly is offering. Adverts and shared revenue is exactly the path Feedly should have pursued when they had the chance in late 2013 (instead, Feedly choose to be hostile to publishers).

Let’s hope Feedly pursues the advert opportunities now; they certainly have the cover for it. And with tens of millions of current users, Feedly is also potentially a source of revenue equal to the promise of Apple News.