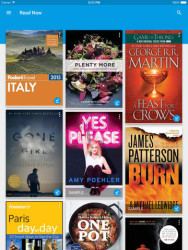 Google is playing catch up today. They’ve released a new version of their ebook app for iOS today which adds many of the features that the Play Books Android app has been getting over the past few months.

According to the change log, this update adds the Literata font Google announced back in May and an option for left alignment (ragged right, yay). It also sounds like the iOS app now has some of the UI enhancements that Google added to the Android app last week.

And most importantly, the Play Books app for iOS now lets you sync your notes and highlights to Google Drive. As I reported yesterday for the Android app, each ebook’s annotations are stored as a separate doc in Google Drive (one doc per ebook), and can be viewed in Google Docs (example, other example).

Each annotation includes a link to its location in the ebook, so if you type a note and then share the doc, anyone who also has that ebook can open their copy and see what you were commenting upon.

And yes, this works with uploaded ebooks.

Play Books is not the only app that lets you export your annotations (you can, for example, export your Kindle notes) but the Play Books option is much more convenient.

However, it is also restricted by publisher permissions. Several of my ebooks have failed to send the highlights to the doc in Google Drive. From what I can tell, the publisher hasn’t enabled the option (or perhaps intentionally disabled it, I don’t know).