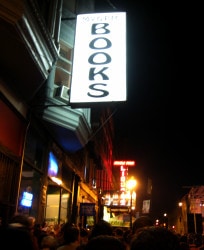 While it’s customary to gripe about the terrible service offered by a monopoly, some forget that a monopoly, especially a digital monopoly, is not nearly the sinecure that they assume.

Dr Joshua Kim has been blogging over at Inside Higher Ed, where he’s been using his podium to rail against Amazon. Kim is a Kindle and Audible customer, and over the past couple months he’s complained about Audible’s technical issues, the lack of Whispersync enabled ebook/audiobook pairs, and, just yesterday, how Amazon’s monopoly on ebooks/audiobooks is harming consumers (more Audible technical issues again).

This time around he’s having trouble buying audiobooks. While he did get his money back, he’s annoyed because he would rather have the book.

While I would normally support and work to amplify a consumer’s complaints so they will get fixed faster, Kim’s screed took a turn for the myopic:

Before I dive into the problem (which you really won’t care about anyway), a word on why it is important to pick on Audible whenever possible.

The reason: Amazon. Or more precisely, Amazon’s dominance of the digital book ecosystem.

Amazon owns Audible. Between the Kindle e-readers / books and the Audible audiobooks – Amazon owns a de facto monopoly on the digital book market. Mostly, the consumer seems to have benefited from this digital book monopoly. New books can be had cheaper than ever before. The number of audiobook titles is growing quickly. Whispersync, the name for the Amazon technology that seamlessly syncs up Kindle and Audible books, is just wonderful. (Although far too few titles are Whispersync enabled).

Amazon may dominate the digital book market, but that is because all of the other options are terrible. Apple and Google don’t care to offer a competitive service, B&N has given up, and Kobo, well, the best thing you can say about Kobo’s ebook service is that they make decent hardware.

And as for audiobooks, if Audible is really so terrible then Amazon’s dominance of audiobooks is not a problem so much as it is an opportunity for someone to come along and displace Audible.

Disruption happens, even to Amazon.

And then, later, Amazon became one of the major book retailers because they could offer better prices and a larger selection than any previous bookseller. Similarly, the Kindle platform won the market because the existing ebook options were terrible, prices were high, and the list of available titles shorter than a teen’s attention span.

In the case of audiobooks, the selection is already there. Kim just needs someone to provide a better service than Amazon, and based on his complaints there is certainly room for improvement.

If you don’t think that Amazon can be disrupted,  I would remind you that there was a time that Barnes & Noble and Borders didn’t think they could be displaced from their dominant position in bookselling.

Look where they are now, and tell me again that Amazon can’t be replaced.

images by get directly down,