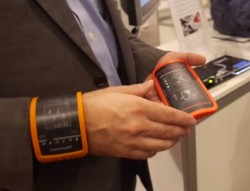 The wearables market may have decided in favor of high quality screens over flexible and durable screens but that hasn’t stopped companies like Flexenable from bucking the trend.

This Plastic Logic spin off was at the IDTechEx at Printed Electronics Europe in May, where it showed off the latest concept designs for  wearable devices with flexible E-ink and LCD screens.

Plastic Logic was best known for its repeated attempts to produce an ereader with a plastic-backed E-ink screen, but as you can see in the following video FlexEnable is looking in a decidedly different direction.

That is nifty tech, but it is also largely the same tech that Plastic Logic has been working on for the past decade and has been trying to sell to device makers for the past five years.

At this point it feels like Plastic Logic (and now FlexEnable) is destined to always be known for the amazing new concept, but never the world-changing product.