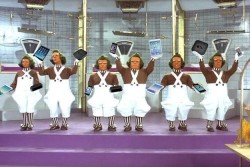 With a refreshed iPhone 6, larger iPad, and an updated iPad Mini rumored in the works, the tech blogosphere is eagerly awaiting Apple’s press event this fall. And now we can start counting down the days.

John Paczkowski writes over at Buzzfeed that his sources are saying that the new hardware will be unveiled on 9 September:

Like Apple fall events past, this one too will focus on the company’s next-generation iPhones, which are expected to arrive at market with a pressure-sensitive Force Touch display, an improved camera system, and a significantly faster and power-efficient wireless chip. Sources say Apple executives are likely to show off the company’s latest iPads as well, though that 12.9-inch “iPad Pro” seems to be a wildcard, still.

Also expected to debut at this event is the long-awaited successor to Apple TV.

I expect that the event will happen on 9 September; Paczkowski has a good track record for Apple connections. The date of the event is arguably a leak, and not a rumor.

But as for the hardware Apple will show off, that is still up in the air.

We haven’t seen nearly enough evidence to suggest that Apple is ready to ship the iPad Pro this fall, but there’s a very good chance Apple will be launching all of the hardware at that event and shipping the new hardware at staggered intervals.

The new iPhone would ship within weeks, but the iPad Pro might come much later. Apple could well repeat the pattern they used for the iWatch, which shipped over 6 months after it was launched.