Facebook has taken the next logical step after its move to host long content originally published elsewhere (Instant Articles); now it wants to make it easier to create those longer works on the social network itself.

Developer David Winer has discovered that Facebook Notes, that little used feature that let you write a note to yourself, is being turned into something that looks a lot like Medium: 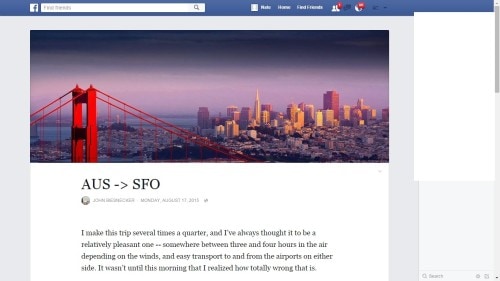 It looks like with the new Notes, Facebook is building a platform where the experience of reading a long update will be as pleasant as on blogging platforms like Medium.

This is good news for FB users (less so for outsiders or competing blog platforms). It’s a feature that FB has needed for the longest time.

FB users have long been able to post updates which could be any length they like (I’ve read thousand word updates, before – no joke) but those updates usually looked terrible due to poor formatting and the fact that updates really weren’t intended to be used for blog posts. Those updates were readable, but only barely.

But now with the new interface, the long posts will look as nice as they would elsewhere. This is going to tempt a lot of casual bloggers into posting on Facebook, where they have access to a large audience in a walled garden.

There’s no word yet on when the new platform will be deployed, but The Verge did get a statement out of Facebook. “We’re testing an update to Notes to make it easier for people to create and read longer-form stories on Facebook,” a Facebook spokesperson said. For now, the test appears to be limited to a small group of beta users.