For the past couple years the Pocketbook CAD Reader has been the holy grail of ereaders. With a 13.3″ screen, Android OS, and multi-core CPU, the CAD Reader promised to be the E-ink Android tablet that ereader fans had always wanted, but it kept missing release date after release date.

But after two years of waiting, it looks like our patience has been rewarded. Pocketbook has a new product listing on one of its websites for the CAD Reader. The listing is far from complete and is still missing key details like the price, release date, and features, but it does hold out hope that the CAD Reader could launch soon. 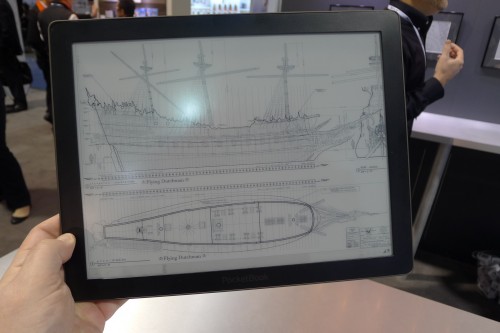 According to the site, the CAD Reader will have a dual-core 1GHz Freescale CPU with 2GB RAM and 16GB internal storage. It won’t have a camera or speakers, but it will have a microSD card slot, mini-HDMI port, and a headphone jack.

In terms of connectivity, it will have Wifi and 3G WCDMA / UMTS (there is no mention of Bluetooth). The 13.3″ Fina E-ink display will have a screen resolution of 1,600 x 1,200 with a capacitive touchscreen (a frontlight was not mentioned). Weighing in at 700 grams, Pocketbook says that it will measure 9.6 mm thin.

Or at least that is what the listing says; whether the CAD Reader will launch is a whole other question.

And for that, I have no answer.

I have contacted Pocketbook twice since I learned of this listing 4 days ago, but I I have not received a response. That makes it impossible to tell whether this listing was an error or a leak that portends the launch of a new device.

I’m hoping it is the latter, but my enthusiasm is tempered by the fact that the store where I found the listing is not functional. It is not one of Pocketbook’s retail sites, so for all we know we found an abandoned project, and not one that is under development.

All I can add at this time is that this bears watching.