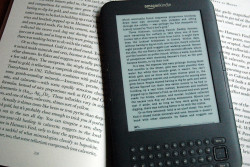 Amazon’s $65 million contract to supply ebooks to schools in New York City has been put on hold this week. According to NY Daily News, NYC DoE officials have postponed the contract in response to complaints that it would exclude the visually impaired.

Amazon had been all set to create an ebook marketplace for NYC’s 1,800 public schools, only to have their plans stall when the National Federation for the Blind quite reasonably asked whether Amazon’s platform would comply with federal law.

Apparently it does not. DoE spokesperson Devora Kaye has said that the school district is working on a new plan which will better serve all NYC’s public school students.

“We are working closely with Amazon and community partners to ensure that all school communities — including those serving visually impaired students — will be able to take part,” Kaye told NY Daily News.

The delay comes only a day before the school district’s Panel for Educational Policy was scheduled to vote on the contract, and it followed two letters of protest sent by the NFB on 8 and 13 August.

Yes, evidently the school district had put the contract up for bid this spring, chose Amazon out of fourteen bids, and was all set to approve the contract – but had not once considered the possibility that said contract might need to comply with federal laws, including the Americans with Disabilities Act.

I guess they don’t know their history, and thus came close to repeating it.

Today’s news reminds this blogger of the lawsuits filed in 2009 and 2010 on behalf of college students. The NFB sued Arizona State University after the school launched a pilot program based on the then-new Kindle DX ereader (the Dept of Justice sued Princeton University over its Kindle DX pilot).

That $400 device did not come close to meeting federal standards for accessibility, and as part of the settlements the schools had to agree to make the Kindle DX an optional tool in the pilot program, and not a required device.

And now the NYC school district will have to provide similar accommodations for its students.