Google added a new hands-free typing feature to its online office suite last week, one which won’t be of much use to potty mouths.

It’s pretty good, actually — it recognized both pronunciations of “gif” and “aunt” in the contexts “animated ___” and “uncle and ___” although it tended to assume that I might have the bit/bet merger, which I most emphatically do not, and thus presented me with a few transcriptions that felt like odd candidates to me.

But then I tried swearwords and hit the fucking jackpot. Here’s a screenshot of what I got: 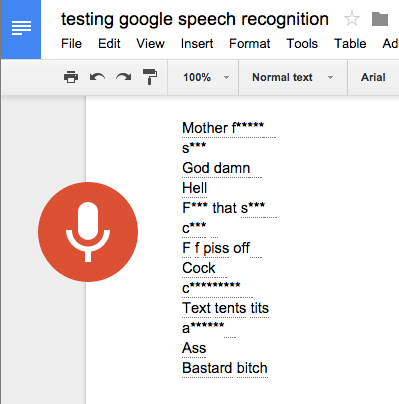 Yes, Google has the sensibilities of a Sunday school teacher, albeit a literate one.

As you can see, some swear words made it through, but not others, and one commenter on McCulloch’s blog had a good explanation as to why. All the unfiltered words have alternate meanings (cock:rooster, tit:bird, ass:donkey, bitch:female dog, etc).

That’s not exactly a great reason to only allow certain words through, but it is still a better method that the one that Clean Reader is using. That app debuted earlier this year with an (optional) prudish word replacement filter. It caused a huge uproar, leading to the ebookstore getting pulled from the app, but surprisingly did not lead to the app being disabled. The app is still around, and it still works (it was just updated last week).

Unfortunately, the new Google Docs filter can’t be turned off at this time.

This is not the first time that the ad network has decided to wash your mouth out with soap. The Google voice function on Android has a similar filter. It could be toggled on or off in the settings menu, but I can’t find any similar option for the new Google Docs filter.