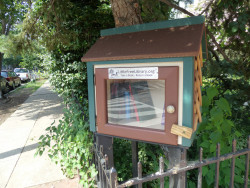 There’s an old saying to the effect that no matter how beneficial a new idea might be, someone will still oppose it. That is certainly true for the Little Free Library movement.

Little Free Libraries are volunteer-run efforts to build local book exchanges. The movement began in 2009 in Hudson, Wisconsin, and there are now tens of thousands of the book exchanges around the world. Each LFL built and maintained independently by an individual (or group)who has taken it upon themselves to keep the library stocked and organized.

Each one is stocks between ten and thirty books, and is housed in a small structure (sometimes a recycled phone booth or a custom built cubby). Book enthusiasts have been erecting them around the world, much to the delight of reading enthusiasts, but not every one is so happy.

Little Free Libraries have increasingly been targeted by vandals, and those book exchanges that have escaped the notice of the criminals have instead encountered the heavy hand of local regulators. 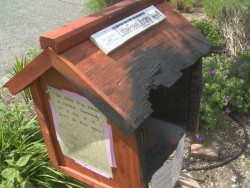 Over the past six months, Little Free Libraries in Minneapolis, Denver, and Seattle had all been put to the torch. Police are calling it arson, but no one knows who is setting the fires, or why.

Anyone passing the charred remains of a Little Free Library on a busy Denver street corner has one thought: Throw the book at them.

Dan Wisdom woke at 3:30 a.m. Monday to fire engine lights flashing through his bedroom window, and arson investigators already were on the scene after someone set fire to his book exchange on the corner of Colorado Boulevard and East 7th Avenue. Wisdom said his first thought was, “Why would somebody do that?”

With no one to blame, the volunteers are left with no other option than to clean up and rebuild.

Fortunately, few also have to fight with the local city or county regulators. The Atlantic, LA Times, and the Shreveport Times all report that local regulators in Kansas, Louisiana, and California are freaking out over Little Free Libraries, and not in a good way.

The authorities are raising objections that range from the absurd to the insane. One complained that the mailbox-sized structure required a zoning variance, while another insisted that the book exchange amounted to commercial activity and would require licensing.

The regulatory roadblocks were apparently thrown up in response to a handful of complaints against a movement that otherwise had broad local support. 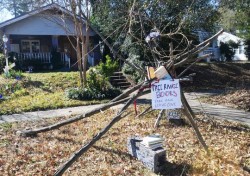 Those roadblocks even inspired one supporter to mock the city of Shreveport by putting the books out sans protection:

To protest the shutting down of a Little Free Library on Wilkinson Street, artist Kathryn Usher placed a stack of books on a wooden block outside her Dalzell Street home. A sign reading “Free Range Books Take One Leave One” hangs above it.

Her action was in response to a notice a Little Free Library’s owners, Ricky and Teresa Edgerton, received from the Metropolitan Planning Commission’s zoning division — a request they cease operating it because the book swap violates city zoning law.

If not, they risked further action if the matter were sent to the city attorney. “I did it in solidarity with Ricky,” Usher said. “I’m basically telling the MPC to go sod off.”

I would think that this is a movement that local governments should get behind, not fight. Isn’t it a shame that more cities can’t be like Indianapolis, which is actively funding the construction of Little Free Libraries?