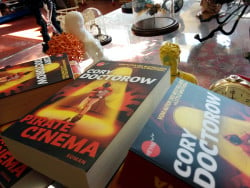 Until they were publicly shamed into changing their policy earlier this year, Google used to have a laissez-faire attitude towards piracy in Google Play Books. Now that indifference is coming back to haunt Google.

TorrentFreak reports that Brein, a Dutch anti-piracy outfit, has filed suit against Google.

When the GAU took action against the piracy in Google Play Books earlier this year, that publisher trade group actually referred the issue to Brein. Brein started an investigation and pressured Google to not just do something about the piracy but also to hand over the identity of the pirate that had uploaded Dutch-language ebooks to Google Play Books.

I bet you can guess what happened next:

Unsurprisingly that wasn’t a straightforward exercise, with Google refusing to hand over the personal details of its user on a voluntary basis. If BREIN really wanted the seller’s identity it would have to obtain it via a court order. Yesterday the anti-piracy group began the process to do just that.

Appearing before the Court of The Hague, BREIN presented its case, arguing that the rogue seller was not merely a user of Google, but actually a commercial partner of Google Play, a partnership that earned revenue for both parties.

Brein announced the lawsuit yesterday on its site (in Dutch). They say that they are only seeking the identity of the pirate, but I am still looking for confirmation. Both Torrentfreak and my Dutch source are working from Brein’s statement, which means all I really have is the one press release.

“The case is clear, Brein said in the statement. “There was infringement carried out by an anonymous seller that was actually a commercial ‘partner’ of Google via Google Play. This is how Google refers to sellers in its own terms of use.”

If Brein is only seeking the identity then they will probably win this suit. They would likely have won the suit even under US law (which in this situation explicitly shields an ISP like Google from financial liability).

It’s not clear what Brein expects to get out of this suit; the pirate is almost certainly not in the Netherlands, and might not even be in Europe at all.

That pirate, which was uploading ebooks under the “author” name Flamanca Hollanda, was just one of many pirates that set up shop in Google Play Books this spring. Hollanda followed the same pattern as the other pirates, suggesting that this was a coordinated effort and not multiple instances of piracy.

I hope Brein does get the info, and releases it publicly. I’d like to know where that pirate was operating.