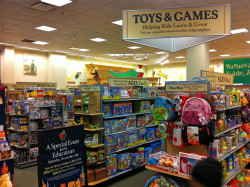 Many were surprised when a little-known investment firm announced a buyout offer for B&N early last year.  We couldn’t figure out how the G Asset Management had raised the $640 million or so it would take to buy the retailer, or how the firm planned to to outmaneuver the largest stockholder (CEO Len Riggio, with his 40% plus share of the company).

The answer is simple: they couldn’t. Yesterday the SEC charged charged Michael A Glickstein and G Asset Management (his company) with fraud.  According to Fortune and Reuters, Glickstein  had not raised the funds required to actually buy all the shares, but he had bought some B&N shares and options on B&N shares, all of which were sold shortly after the buyout offer was announced.

To put it simply, Glickstein was caught attempting a variation of the “pump & dump” scam, only Glickstein made the mistake of trying it with a very public company in a very visible industry.

The evidence uncovered by the SEC was damning, and things did not end well for Glickstein:

The SEC said on Thursday it settled its fraud charges with Glickstein after he agreed to return $175,000 in ill-gotten gains and interest, and accept a five year bar from the securities industry. The SEC is allowing Glickstein to settle without admitting or denying wrongdoing, and another positive for the thirty-something bookstore activist is that there appears to be no parallel criminal action. Media representatives for the SEC and Southern District of New York declined to comment beyond public statements.

That’s a sad end for someone who had been, in his words, trying to fix B&N for several years – and actually had a few ideas that, in retrospect, were worth implementing.

As you know, B&N is now split between the college stores (B&N Ed) and the retail/Nook (B&N).  Fortune reminds us that Glickstein wanted to split the company in three in February 2012, with the retail, college, and digital divisions going their own way. Glickstein also tried to buy control of the college stores in March 2012, and was rebuffed.

Instead, B&N tried to spin out Nook Media as a wholly owned sub, and took in outside investment from Microsoft and Pearson.

And then in March 2013, shortly after the disastrous 2012 holiday season, Glickstein then offered $20 a share for a 51% piece of the retailer. That offer, too, went no where.

It wasn’t until he made a $22 a share offer in 2014 that Glickstein was caught making an obviously fake offer which he could not have followed through on.

There’s no info on the previous buyout offers which could tell us whether they were for real, but in light of yesterday’s news those offers were probably also less than legit.

And that’s a shame, because splitting up B&N years ago would have been a great idea. The Nook division could have been sold to someone who could rescue it, while the stores went their own separate ways.

Instead, it’s 2015 and the Nook division is worthless, and the company only just got around to splitting up.