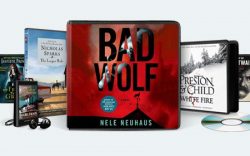 With most of the major publishers (and even Amazon) having their own audiobook publishing division, Blackstone has decided that turnabout was fair game.

Starting this fall, Blackstone Publishing will release classic and original titles in both digital and print. Its first title will be James W. Huston’s new thriller The Blood Flag. That title is due out on 10 November, and it will shortly be followed by a number of Western titles, including Zane Grey’s Silver Mane and The Water Hole, and Louis L’Amour’s A Man Called Trent and The Rider of Lost Creek.

Blackstone expects to release 15-20 titles under the new imprint in 2016. The audiobooks will be available through Blackstone’s audiobook store, Downpour.com, and the ebooks and print titles will be sold in the major bookstores. According to PW, the publisher will be working with Baker & Taylor and Ingram to distribute the titles, as well as chain stores, libraries, and other channels.

Blackstone is not the first audiobook publisher to branch out into print and ebooks; that would be Tantor Media, which added print to the mix in 2012.