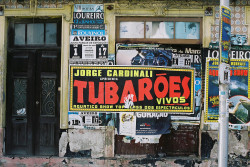 Investors might not have a lot of confidence in the future of the ad tech industry, but ad blocking companies are proving immensely popular.

Adblock, a popular extension for blocking adverts in Safari and Chrome with more than 40 million users, was quietly sold yesterday. Michael Gundlach, its developer, announced the news to users in the form of a pop up advert.

The notice mentions that Adblock would be participating in the acceptable ads program which had originally been  developed by its competitor Eyeo (makers of the similarly named Adblock Plus), but down in the fine print he mentions that he is selling the company: 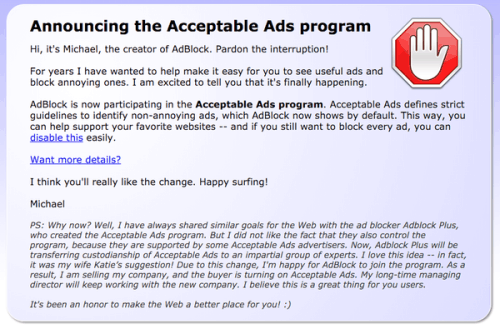 The news of this sale comes at an interesting time for the advertising industry. As more ad block developers sell out, and it becomes increasingly clear that adverts inflict a high cost on users, and traffic is down on many sites due to unexplained changes to the web landscape, publishers are questioning whether they can survive.

Some, like the Washington Post and the Star Tribune, are blocking ad blockers. But others are going with the flow and are giving users the option to disable adverts, and still more are exploring new models or ways to fight ad blockers.

Gundlach has yet to publicly comment on the sale, but the notice was first seen on Twitter, and picked up by TNW.  We’re all still trying to find out who bought the company, but at this point neither Gundlach or the Adblock staff is willing to say who is now pulling the strings.

And that is a problem for Adblock’s 40 million users. It’s bad enough that Adblock is closed-source software whose features can change with little notice, but can the users still trust the developers if they don’t know who is really running things behind the scenes?